(670 The Score) I’m pretty sure I almost sank my car driving to the Bears game Sunday. That isn’t even an attempt at an exaggerated, catchy lede – there was one very specific right turn on my way to Soldier Field that had me wide-eyed, turning down my music and readjusting my posture. 1-and-a-light-7 turned back into 10-and-2 real quick. There’s a specific type of panic reserved for that moment when the steering wheel of your car isn’t useful anymore, and let me tell you, reader, it works in ways even the hottest black coffee can't. At the least, it would've been a funny tombstone.

No one on the Bears had ever played in conditions like Sunday’s. After the Bears' 19-10 upset win, safety Eddie Jackson called the rain "different" and mused about how he'd gone his entire life, "from Little League to college," without ever seeing that type of downpour. Offensive lineman Teven Jenkins -- who played games in ice storms as a kid in Topeka, Kansas -- said that players could only do so much before "you (had) to start improvising." After picking himself up off the ground on a kickoff, running back Khalil Herbert jogged to the sidelines weighed down by cleats full of water, slushing with every step. "It was fun," he said.

It was fun. And roughly 95% of the immaculate postgame vibes were solely because the Bears, you know, won – but still, Sunday’s soaker was fun. There’s going to be a time in the not-too-distant future in which every Bears game is played in wonderful, climate-controlled environments, and that’s fine. (I mean personally I don’t think it’s fine, but whatever. I fought. I lost. Now I rest.) Soon all those people who wear shorts way too late into the year to prove a point will finally have a home. C'est la vie. It’s a meathead take, but it’s my meathead take: I’ll miss bad-weather games. 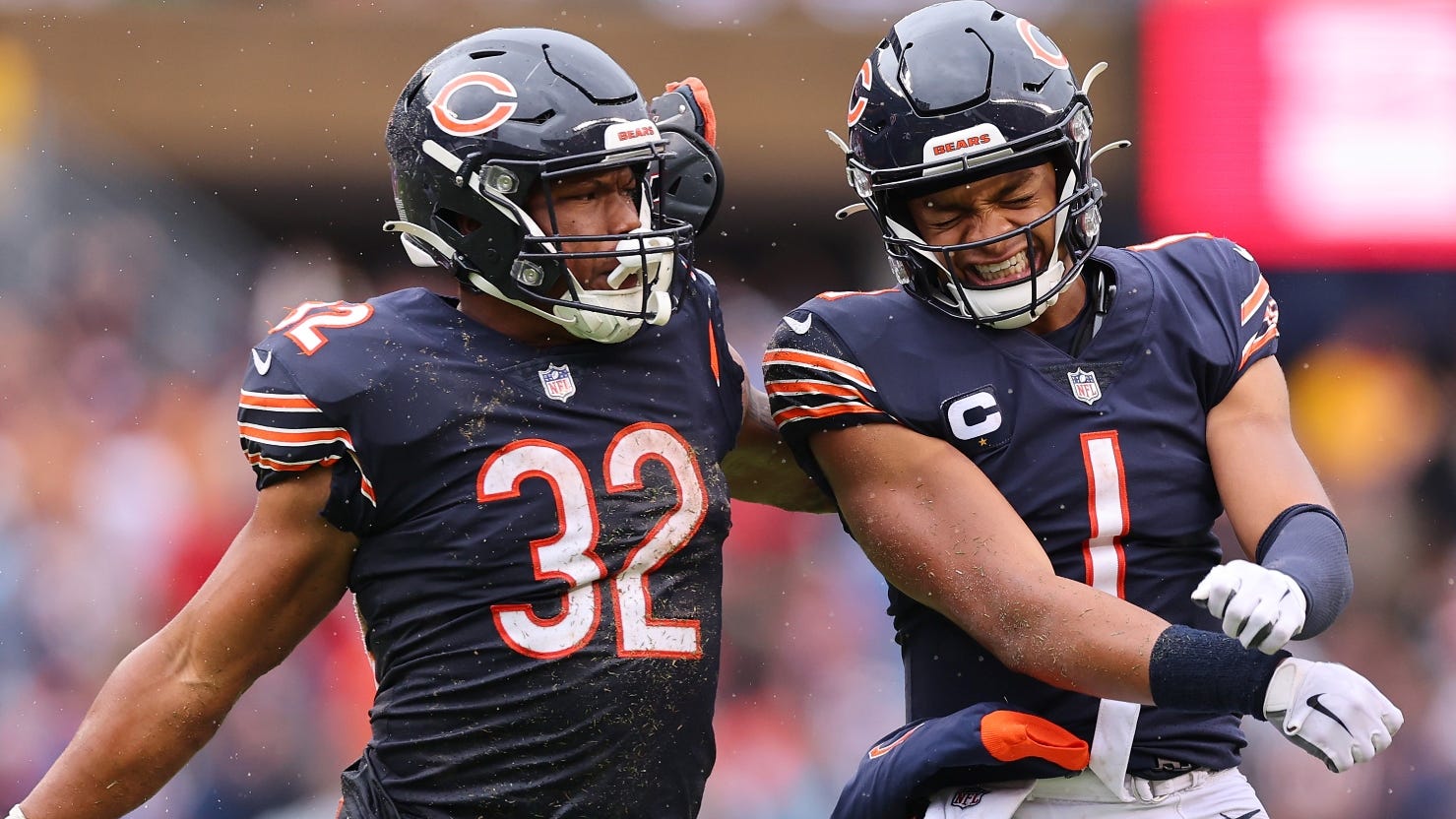 I’d argue the rain did more good for the Bears after the game than it did during it. If they beat the 49ers by two scores on a picturesque midwestern fall day, there’s no money shot of quarterback Justin Fields and the rest of the offense sliding into the end zone. Is a picture of Fields politely handing the ball to the referee making it onto the NFL’s Twitter header? The Bears' own account turned around pro-shot highlights dubbing it "The Rain Game" before the sun even set.

It's not remotely important on the grand scale of things, but there’s a certain mysticism to bad-weather games that sticks with people – thanks to a low-pressure system moving through the upper atmosphere, Sunday’s contest wasn’t just a Week 1 upset win, it was The Rain Game. Every Bears fan I know can recite a half-dozen bad-weather memories right off the dome. Remember the Bears playing the Rams in 2018? I’m not sure I’ve ever heard anyone tell stories about that game without the cold being a major character. It’s not the home-field advantage that lots of us in the mainstream media would have you think, but, to me at least, a bad-weather win is kind of like fudge: Truthfully, I don’t need or want that much of it, but if someone told me today that I’d never get to have some ever again, I’d be a tiny bit bummed.

Football games are too expensive. Tickets, parking and concessions can easily run someone half a grand, which is absurd and stupid and also several other adjectives. Fans who spend that type of money to watch Fields throw for like 37 yards in one half shouldn’t also have to do it soaked to the bone. (That's not even mentioning player safety, which is a dumb to not even mention considering it should be the top priority.) Lots of those same fans are, after all, the ones about to foot the bill for an entire neighborhood of capital-S stuff next to the new stadium. The least the Bears could do for them in return is not subject them to some of life’s little inconveniences like "dangerously frigid temperatures" and "biblical flooding."

So let us pour one out for the bad-weather win, a necessary sacrifice in the everlasting hunt for one Super Bowl and a couple marquee early December college basketball games. You will be kind of missed, by some people. It’s better than nothing.