CHICAGO (670 The Score) -- The Bears found a way to win Sunday at Soldier Field, earning a 23-20 victory against the Texans on kicker Cairo Santos' game-winning 30-yard field goal as time expired.

In improving to 2-1, the Bears overcame an uneven performance on offense, a few breakdowns on defense and the loss of running back David Montgomery. It was a win that reminded us the Bears are still in their "developmental stage," as coach Matt Eberflus said. Here are the observations from Soldier Field.

Searching for confidence
When someone voluntarily refers to his work as “trash,” he's feeling it. Bears quarterback Justin Fields didn’t hold back in assessing his play Sunday after he went 8-of-17 for 106 yards and two interceptions.

“Straight up, I played — I want to say the 'A' word, but I’m not going to do that," Fields said. "But I just played like trash. I played terrible. Really, I just got to be better.”

Since being selected by the Bears with the No. 11 overall pick in the 2021 NFL Draft, Fields has showcased refreshing self-awareness and an understanding of his role in Chicago. But with lofty expectations comes great pressure, and he seems to be putting that burden on himself.

Fields has the potential to be a dynamic dual-threat quarterback and a star in the NFL, but he appears to be lacking the confidence to make the right decisions on the fly. On Sunday, he didn't properly process what coverages were presented, nor did he pull the trigger when opportunities were there.

On his first interception coming in the second quarter, Fields elected to pass on a read-option but didn’t properly set his feet. He was aligned to his left and not toward his target as tight end Cole Kmet moved on a post route over the middle. Fields then misfired on the interception.

Justin Fields wanted to dive right into the film last night. He’ll be frustrated with his footwork on the first interception. Poor alignment contributed to overthrowing Cole Kmet over the middle. pic.twitter.com/2oBu0NDVow

Fields tossed his second interception on the first play of the fourth quarter by overthrowing receiver Darnell Mooney, who was bracketed in triple coverage. It was a bad decision and worse throw.

On the Bears' next possession, Fields elected to scramble on a third-and-9 when there simply wasn’t a rushing lane there. He didn’t try to find a target downfield, even though that was the better chance to move the chains. That decision to rush the ball came soon after he had forced the ball into coverage, resulting in the interception.

Those are the mistakes of a young quarterback who's lost.

Getting Fields out of this state of mind will be a gradual process, one that will rely heavily on Bears offensive coordinator Luke Getsy and a more simplified structure with the reads in his play calls. Getsy needs to keep setting up Fields with layups and build his confidence back up.

Fields is just 23 years old and has only made 13 NFL starts. By no means should anybody give up on him, but his development is also facing challenges ahead.

Fields has to find his best self again, because it isn't there right now. 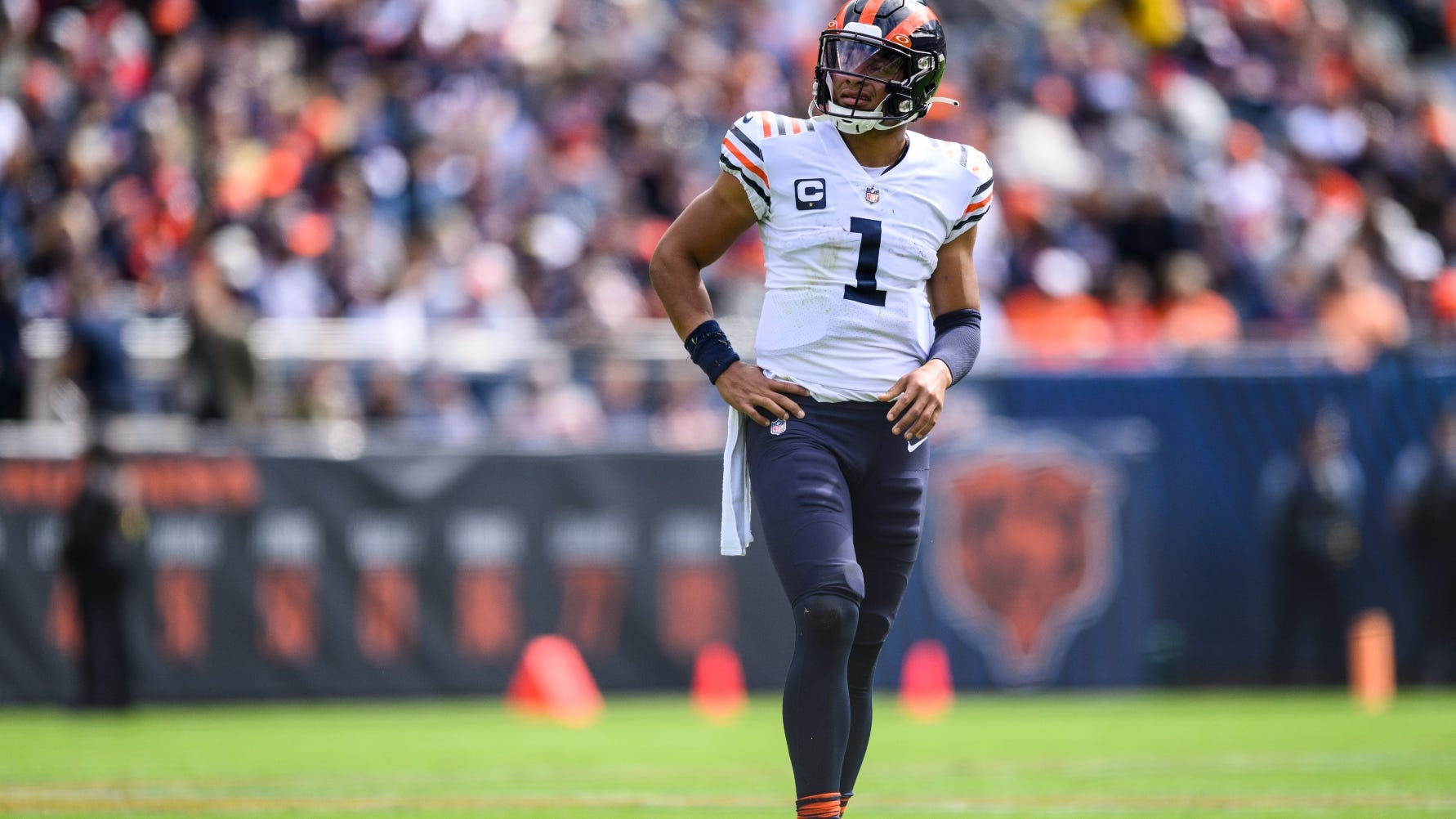 Getsy’s side of the story
Getsy's job is to create and implement a winning game plan while also developing Fields. But when forced into a choice between those two, Getsy has made a point to mitigate risk amid Fields' struggles.

Second quarter, 10:30 – Third-and-6 from their own 14-yard line:
In what seemed to be an obvious passing situation, Getsy called for a draw play with rookie running back Trestan Ebner, who gained just two yards before the Bears brought out their punt team to loud boos at Soldier Field. The fans were frustrated by the conservative play call. But the next two third-and-6 plays illustrated why Getsy was conservative on this play.

Second quarter, 1:53 – Third-and-6 from the Texans’ 23-yard line:
Getsy drew up a passing play this time, but it stood no chance. The right side of the Bears’ offensive line crumbled, with guard Lucas Patrick and tackle Larry Borom whiffing on their blocks. Fields was sacked for a nine-yard loss, and it nearly pushed the Bears out of field-goal range. But Santos connected on a season-long 50-yard field goal as Chicago still cashed in. This play reminded us that Getsy's concerns go beyond Fields, who also has poor pass protection around him.

Fourth quarter, 15:00 – Third-and-6 from their own 26-yard line:
Getsy gave his quarterback a chance to make a play again, but Fields made a mistake. He threw his second interception of the game on a pass that should’ve never been forced into tight coverage.

Communication is key
The Bears led 10-0 and were off to a strong start in the first quarter when their defense had a serious breakdown in coverage.

Texans quarterback Davis Mills found wide-open receiver Chris Moore down the right side of the field for a 52-yard connection. It was another example of poor communication in the Bears' young secondary. Rookie cornerback Kyler Gordon was lined up against Moore in the slot and hesitated as the route approached safeties Eddie Jackson and Jaquan Brisker.

Gordon seemed to believe he was passing off Moore to one of Jackson or Brisker in coverage. After shuffling his feet, Gordon renewed his pursuit of Moore from behind, but it was too late. Mills found his target, and the Texans hit a big play that set up their first touchdown of the game.

Extra points
-- It appears the Bears have been fortunate with running back David Montgomery's right ankle/knee injury, with coach Matt Eberflus calling the prognosis “good.” But if he's required to miss time, running back Khalil Herbert has shown he can carry this offense. Herbert had a terrific performance Sunday, carrying 20 times for 157 yards and two scores. He continues to show patience and vision in finding the right rushing lanes.

Excellent vision and cuts from Khalil Herbert as he find the end zone for the second time this young season. pic.twitter.com/Eh63cDX2IN

-- Jackson believes he can return to his Pro Bowl-caliber form this season, and he's had a strong start. He has two interceptions through three games, including a pick on a deflected pass in the end zone Sunday. In hindsight, that turned into a game-saving play.

-- I thought the Bears would end their right guard rotation, but Patrick and Teven Jenkins continued to switch out every two series. “I’m not going to fight it," Jenkins said after the game. "I’m not going to do anything. I’m going to do my job.”

-- After two lackluster performances, linebacker Roquan Smith shined like a star Sunday and played at a level that warrants a major contract extension. If he can stack up performances like that, he'll get paid.

-- Bears defensive coordinator Alan Williams was quite aggressive on third downs Sunday, a departure from his stylings in the first two games. There were positive moments of aggression, like when Gordon rushed on a nickel blitz and broke up a Mills pass at the line. On the flip side, Brisker also came on a safety blitz on another play, and Mills found tight end Pharaoh Brown wide open.

-- Lovie Smith is a good football coach, but challenging plays hasn't been his strong suit. He's now 34-53 on challenges in his career after a curious choice to review a play on which Fields was clearly down by contact and the ball came loose late. The play was upheld, and the review was brief.

-- Bulls star Zach LaVine and many of his teammates were in attendance at Soldier Field on Sunday. LaVine might be the Bears’ top wide receiver if he suited up.

-- Few pundits believed the Bears would start 2-1, and yet it seems so unsatisfying anyway.

-- Sunday was the day that Chicago started to doubt Fields more than it believes in him.