(Audacy) Barry Bonds and Roger Clemens are on the Hall of Fame ballot for the 10th and final time in 2022, but don't expect the debate about how Cooperstown should view players believed to have cheated for part or all of their otherwise Hall of Fame-worthy careers to subside anytime soon.

Frankly, we're just getting warmed up.

While you would be hard-pressed to find anyone who believes that Bonds and Clemens didn't use performance-enhancing drugs, both were Hall of Fame-caliber players before they're believe to have had extra assistance. There are other players, like Sammy Sosa, who it's unclear what their career would've been like if not for the perceived use of PEDs and who will be left off ballots that include Bonds and Clemens. And some voters who will have no problem voting for Bonds, Clemens and David Ortiz will refuse to vote for Manny Ramirez and Alex Rodriguez because they were actually suspended by the league for their connections to banned substances, unlike the aforementioned trio.

It's a messy debate, especially since some voters view the Hall of Fame as just a museum, while others view electing a player to Cooperstown as an endorsement. The truth might lie somewhere in between those two positions.

And while the PED debate has largely affected the Hall of Fame candidacies of some of the greatest offensive players from the 1980s, 1990s and 2000s, the next generation of BBWAA voters will have another issue to consider: Should the candidacy of a star pitcher from the 2010s be derailed if there's credible evidence that they doctored the baseball using banned foreign substances?

After looking the other way for quite a while -- just like it did with PEDs -- MLB began a crackdown last June on sticky substances being used by pitchers. While it didn't take long for glove checks to become just another part of the game, it was an awkward process when initially implemented. The most notable incident came when the Philadelphia Phillies were hosting the Washington Nationals on June 22, when then-Nationals ace Max Scherzer was enraged by Phillies manager Joe Girardi asking umpires to check him for the third time that night, this time in the middle of the bottom of the fourth inning.

Girardi took a ton of heat in the days after this incident -- including being called a "con artist" by Nationals general manager Mike Rizzo -- but Scherzer is actually the perfect person to examine for this debate.

A three-time Cy Young Award winner, Scherzer should be a lock statistically for the Hall of Fame and is pretty frequently referred to as "a future Hall of Famer." With that said, Girardi's request wasn't out of the blue.

In an in-depth feature story written by Stephanie Apstein and Alex Prewitt of Sports Illustrated, Brian "Bubba" Harkins detailed his firing as the visiting clubhouse manager for the Los Angeles Angels in March 2020. The cause for termination? After closer Troy Percival left the Angels ahead of the 2005 season, Harkins essentially became the point person for creating and distributing a sticky substance that consisted of rosin, liquid pine tar and Manny Mota grip stick.

In the article, Sports Illustrated confirmed the legitimacy of text messages sent from various star pitchers or those around them hoping to acquire foreign substances from Harkins to get a better grip on the ball. Among those who Harkins claims to have supplied are Scherzer, Justin Verlander, Gerrit Cole, Corey Kluber and Adam Wainwright. Wainwright has admitted to using the substance for "six or seven starts" in 2019 before deciding he didn't find it effective. As far as we can tell, none of the other four have been asked specifically about the SI report.

With Cole, there are direct texts that he sent to Harkins cited in the story.

“Hey Bubba, it’s Gerrit Cole,” came a message from Cole’s number in January 2019. “I was wondering if you could help me out with this sticky situation,” the text continued, along with a winking emoji. “The stuff I had last year seizes up when it gets cold, can you come up with, or do you have a mix that will play better in cold weather?”

“Hey Cole, the only thing I think I can do is put more tar in it and less (Mota) stick,” Harkins responded. “I’ll play around with it and see.”

The reply from Cole’s phone: “We tried mixing the liquid in it and it definitely helped but it was a sloppy mess. I feel like incorporating a different ratio from the beginning of the process would be more ideal.”

Now getting ready for his third season of a nine-year deal with the New York Yankees, Cole also all but admitted to using the substance Spider Tack when asked about it this past June:

here's gerrit cole's response when asked point blank if he has ever used spider tack, one of the sticky substances baseball is looking to crack down on pic.twitter.com/rKFOksIDoW

So with Cole -- like Rodriguez and Ramirez -- there's pretty clear evidence that he was doctoring baseballs. Do with that what you will. Cole leads all starting pitchers in fWAR over the last three seasons and is trending toward having a case for Cooperstown. Some voters won't care, just as they don't when evaluating the Hall of Fame cases of Rodriguez and Ramirez. Others will penalize Cole, viewing doctoring the baseball as a mortal sin in baseball terms. But either way, no voters will be able to plead ignorance on this matter. If you cover or follow baseball, you're aware of Cole's ties to foreign substances.

For whatever reason, though, the credible SI story didn't seem to harm the legacies of Scherzer or Verlander in any way. Neither had a hand-in-the-cookie-jar moment like Cole seemingly did on Zoom. That may be because neither were asked about it. Verlander missed the entire 2021 season because of Tommy John surgery and hasn't spoken to the media that covers the Houston Astros since this report. Scherzer -- now a New York Met -- wasn't asked by the media in D.C. or Los Angeles about the validity of this report and hasn't been in New York to this point. There are politics to covering a baseball team and some people who are able to ask certain questions and some who probably can't. None of those who have built up relationships with Scherzer or Verlander over their storied careers has stepped up and ask the tough questions regarding this story.

With Verlander, he was teammates with Percival on the Detroit Tigers in 2005, where Harkins says he was introduced to the substance and later reached out to him for more. It's not clear how long Verlander may have used the substance for. 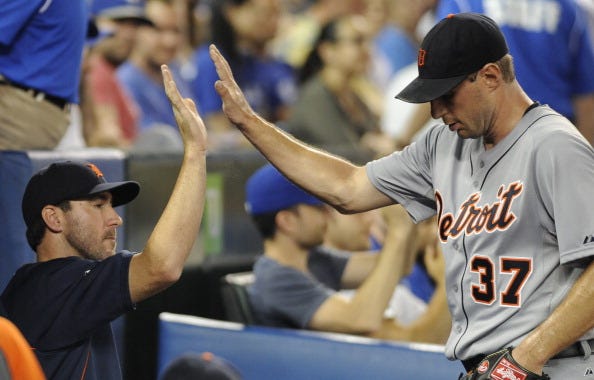 Meanwhile, there's no evidence that Scherzer directly reached out to Harkins himself. But, he was teammates with Verlander in Detroit from 2010 to 2014, and the SI story included text messages from an unnamed Nationals staffer in February of 2017, 2018, 2019 and 2020 asking for the sticky stuff on behalf of Scherzer. It's possible that the staffer ordered it without Scherzer's approval and each year he threw it away. Common sense, though, leads you to believe that the eight-time All-Star probably used the foreign substance during a period in which he cemented himself as an all-time great and helped the Nationals to win their first World Series title.

None of this is to suggest that Cole, Scherzer and Verlander were outliers in the sport, because by all accounts use of various sticky substances was rampant. But even if the league looked the other way, these substances were banned. And the "well, everyone was doing it" argument hasn't worked to sway enough Hall of Fame voters for players connected to PEDs. Seemingly then, the same standard should eventually be applied to Cole, Scherzer and Verlander, among others.

It's true that Gaylord Perry is in the Hall of Fame despite openly discussing having doctored the baseball in multiple ways throughout a career that saw him win 314 games. Conventional wisdom would tell you then that doctoring the baseball isn't something that Hall of Fame voters consider to be enough of a red flag to keep you out of the most famous museum in sports, so Scherzer, Verlander and Cole should be fine.

It's not that simple, though. While Bonds, Clemens, Sosa and Mark McGwire are among those who have been kept out of the Hall of Fame because of connections to PEDs, the culture of "greenies" in baseball during the 20th century has just been accepted. It was in the coffee in the dugouts. No legendary player -- not Willie Mays, nor Mike Schmidt -- was ever penalized by Hall of Fame voters for their connections to amphetamines.

No one is suggesting that greenies had as profound of an effect on your baseball abilities as the drugs used during the steroid era did, but if a player was caught using a similar substance today, they would be suspended and their legacy would be tarnished. An entire era of superstars, though, was grandfathered into the greenies culture.

There could be similar dynamics at play for Cole, Scherzer and Verlander one day -- Cole specifically, because his connection to foreign substances is most well known. Just because Hall of Fame voters in 1991 looked the other way for Perry doesn't mean Hall of Fame voters in the years and decades to come will do the same for pitchers who doctored baseball's during an entirely different era.

It's possible, though, that names like Bonds and Rodriguez are kept out of the Hall of Fame but voters ultimately decide to look the other way on pitchers believed to have gained an edge using sticky substances.

You're left with the feeling that as long as baseball exists, the line between pushing the envelope and cheating will be subjective. And good luck trying to determine what level of cheating just gets you a slap on the wrist, as opposed to disqualifying you from being in the Hall of Fame. There's no 100% correct answers here, just a debate that we'll be having as long as we all live.