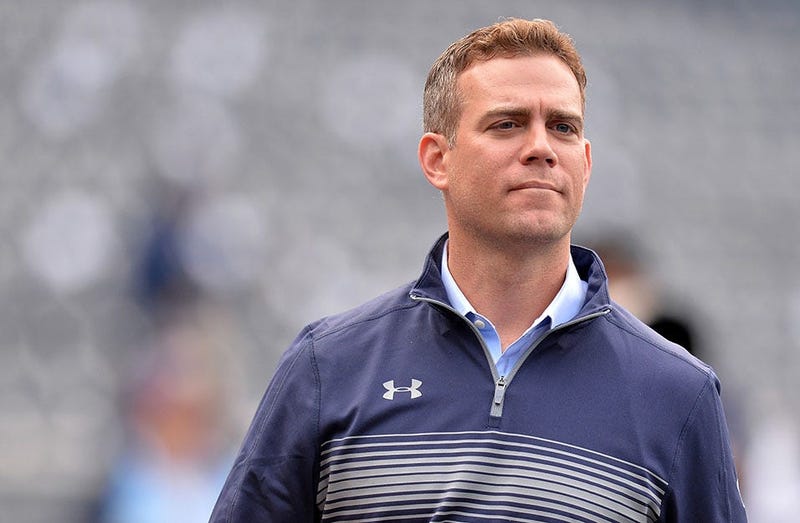 Photo credit Jake Roth/USA Today Sports
By Inside the Clubhouse, 670 The Score

(670 The Score) As the Cubs' offseason of inactivity stretches into its third month, president of baseball operations Theo Epstein emphasized that the $206-million competitive balance tax threshold for 2019 isn't dictating the team's plans or approach this winter.

"The CBT threshold is not dictating any of our actions or inactions this winter at all," Epstein said on Inside the Clubhouse on 670 The Score on Saturday morning. "We're not governed by that. There are times when strategically you want to make sure you're under it or where you don't mind going above it. This isn't one of those offseasons where strategically it makes a heckuva lot of difference to us. It's just sort of traditional budgeting. You spend what you have. You don't spend what you don't have. And you try to put the absolute best team on the field with what you do have, and that's what we've done every year. We have more than enough resources to win, and that's the way we're going to continue to approach it."

The Cubs have only made a few low-profile moves this offseason, trading backup infielder Tommy La Stella to the Angels while signing utility infielder Daniel Descalso and right-hander Kendall Graveman. The primary reason for general inactivity is because the MLB offseason is playing out more slowly, not because of the luxury tax, Epstein said.

"I've said that all offseason, from the first press conference on: This is not an offseason where anyone should be fixated about the tax," Epstein said. "It's like any business -- there are budgets. You can't ignore them. You can't spend what you don't have. You should spend everything you do have. There will be offseasons where you'll be very, very mindful of the CBT and not going just a touch over it, for example, and then hurting yourself with respect to future tax rates or draft positions and those things. That matters. This is not one of those offseasons. So I wouldn't waste a lot of time thinking about the tax as you try to assess what's going on."

The Cubs already have an estimated $200 million or more in financial commitments to their current roster for 2019 when including set-in-stone salaries and projecting for arbitration raises, and that's doesn't include any money they'd like to reserve for in-season moves or trade acquisitions. That fact, industry speculation from agents and the Cubs' trade of Drew Smyly and his $7-million salary to the Rangers on the same November day that they picked up Cole Hamels' $20-million team option for 2019 have been signals that Chicago won't be a major player for premier free agents.

While Epstein didn't mention star outfielder Bryce Harper by name Saturday, he did respond to a question about the addition of a high-profile free agent. As you'd expect, he didn't give a great deal away.

"I'm very respectful of the way fans choose to root for the team," Epstein said.

"We're lucky and privileged to have people who care about this team so much. However they want to relate to the team, if they want to be really focused on the offseason and have big expectations for big names, that's absolutely their right and I totally get that. It can be fun following every move or non-move in the offseason and being critical. Ultimately, once you start playing, there's a natural exhale and a return to focusing on the games and on trying to win, and that's what becomes most important again. I think once we start playing again, there will be a return to the focus on the field, which is a sort of more healthy state for everybody.

"But for now, for this winter, I'm not going to tell them what to expect or what not to expect. Anything is possible. Of course, some things are extraordinarily unlikely and some things are more realistic. There are going to be big offseasons, and those will be much applauded. Sometimes those lead to winnings seasons and sometimes they don't. And there will be smaller offseasons that will be almost completely status quo, and those will be usually met with a lot of criticism. It doesn't mean it's not going to be a wildly successful and entertaining season.

"I'm just honored the fans want to follow the team even in the offseason. I'm not going to take any of their hopes away."

While acknowledging all that, Epstein's main message was that internal improvement will be the key to the Cubs' fortunes in 2019 after they fell in the National League wild-card game this past season.

"They're a motivated and determined bunch," Epstein said of the Cubs as currently constructed. "I wouldn't bet against us."