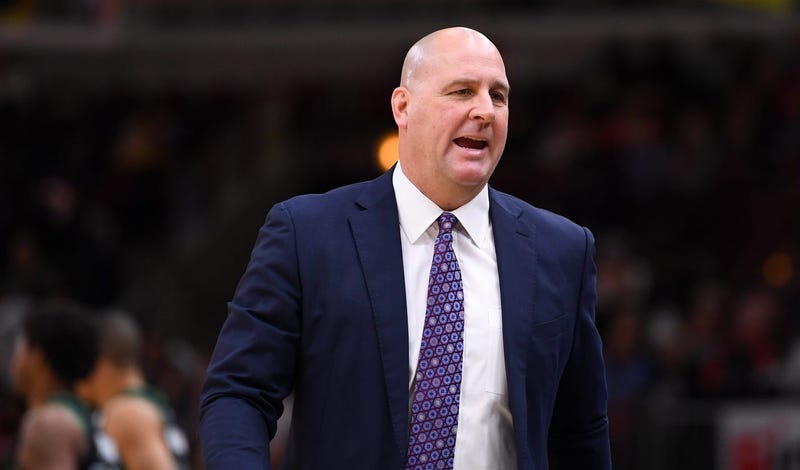 CHICAGO (670 The Score) -- In what’s become a theme recently, the Bulls played a quality opponent tough but were undone by a bad third quarter in a 111-104 loss to the Celtics at the United Center on Saturday night.

Here are the notes and observations of the evening.

1. In a change of course, Bulls coach Jim Boylen utilized an eight-man rotation for what was believed to be the first time all season. Dropping out of a rotation that’s usually 10 deep were regulars in guard Ryan Arcidiacono and wing Denzel Valentine. It was Arcidiacono’s second straight benching by coach’s decision. Shaq Harrison took Arcidiacono’s minutes in the Bulls’ loss to the Jazz on Thursday, but Harrison didn’t play Saturday.

Big man Thad Young played small forward for a couple stints in the reconfigured rotation. It was his first time playing small forward this season.

“I wanted to,” Boylen said of his reasoning for the eight-man rotation. “I wanted to give it a look. And I played Thad at (small forward), I played three big guys together and I wanted to look at it. This was the team to do it against. I liked it. I just liked it.”

Boylen wouldn’t commit to utilizing an eight-man rotation or the three-big man look when Chicago visits Dallas on Monday, saying he needed to review the film. Regardless, it’s clear he’s looking for answers as the Bulls have continued to struggle.

2. Young was informed by Boylen at shootaround Saturday morning to be ready to play small forward. Young did some of that in the first quarter and then began doing so again at the 9:09 mark of the second quarter, when starting power forward Lauri Markkanen returned earlier than usual for his rotation turn.

In the ensuing 3:34 with their three-big man lineup on the floor, the Bulls were outscored by two points by the Celtics. The Bulls used the same tactic in the second half for a stretch of 2:04 and were outscored by four points. All in all, the three-big lineup wasn’t successful in checking in at -9 for the night.

Having publicly expressed his desire for more playing time, Young was content to play small forward. He explained there wasn’t much of a difference from his usual power forward role because he was still setting many screens.

As for the rest of the team? Young acknowledged the changes could take some time getting used to.

“When you start shifting guys, it throws a lot of different things off with what we do as a team,” Young said. “This is very unusual territory when you start moving guys in and out of the lineups and stuff like that. So it’s just one of those things we just have to continue to figure out as we go.”

3. The Bulls ran out of timeouts with 4:09 remaining, which is rare to see in the NBA.

Boylen wasn’t planning to use his final timeout, but Markkanen had his ankle stepped on and went down hard. As Markkanen writhed on the floor in pain on the dead ball, Boylen instructed trainer Jeff Tanaka to tend to him.

When a trainer leaves the bench, a team is charged a timeout.

“I’m not going to save a timeout when I got a guy out there that looks like he got really hurt,” Boylen said. “That’s not what I’m about.”

Teams are only allowed to use two timeouts in the final three minutes of a game. Boylen pushed back when asked why he doesn’t prioritize having two timeouts left at that point.

Boylen is correct in his assessment that he’s usually had two timeouts left late in recent games. That includes in a comeback win against the Wizards on Dec. 18, when he used two timeouts in the final eight seconds to set up two sets of game-tying free throws for Zach LaVine.

Of course, that shrewd use of his timeouts came just two days after an egregious snafu from Boylen. It was in that loss to the Thunder on Dec. 16 that Boylen managed to not have any timeouts remaining in the waning seconds of a game the Bulls had earlier led by as many as 26 points.

After the Thunder took a three-point lead on two free throws with 1.3 seconds left, LaVine haplessly hoisted a 51-footer for the tie because the Bulls couldn’t advance the ball.

As for his sometimes liberal use of timeouts at the expense of not having them late?

4. The Bulls fell to a season-high 10 games under .500 with their loss to the Celtics. At 13-23, they’re three games behind the Magic for the eighth seed in the East. Chicago’s playoff odds sit at 11%, per FiveThirtyEight.

The Bulls were once again hurt in the third quarter, when they were outscored 30-21. Chicago encountered similar struggles in losses to Milwaukee on Monday and Utah on Thursday, playing strong foes tough save for one pitiful stretch out of the halftime break.

“We’re competing at a high level with those teams, we’re just not finishing the game off,” said Zach LaVine, who had a game-high 35 points. “And that’s what is separating us from those top-tier teams ... We’re not closing out games with wins.”

Tatum and Dunn had jawed at each other on several occasions throughout the night. Tatum got the best of Dunn in scoring 28 points, though he worked for his buckets.

Dunn was asked if he said anything to Tatum after the latter’s tough shot to seal the win.

“I didn’t say nothing to him,” Dunn said. “I said something to myself – like what the f***? I mean, you make that shot, you got it rolling. You know what I’m saying? You got it rolling. He had it rolling. The only thing I can do it tip my hat off to him. We paid respects after the game. But I’m frustrated with myself. I don’t want nobody to score that many points, especially on me.”