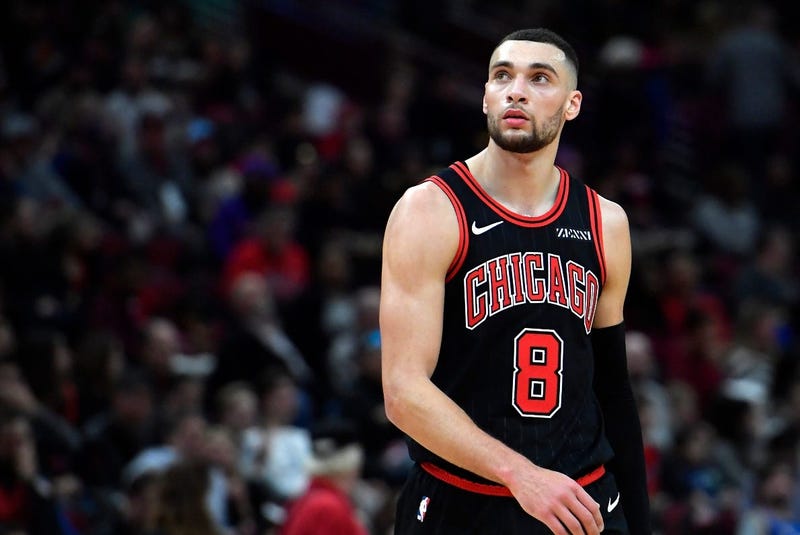 CHICAGO (670 The Score) – Bulls coach Jim Boylen got to the point a mere 24 seconds into the opening remarks of his postgame media session Friday, before he even took questions.

“I like that the ball is in Zach’s hands,” Boylen said. “I believe in Zach at the end of the game. And we had our opportunities.”

That the Bulls did, but yet another one slipped away. It ended with Zach LaVine’s 30-foot pull-up 3-pointer in the waning seconds drawing back iron, sealing the Warriors’ 100-98 victory at the United Center and ending the Bulls’ short-lived two-game winning streak.

It also led to more head shaking from the Bulls, who fell to 8-15 and lost for the second time in 10 days to the lowly Warriors, who entered the evening with the worst record in the NBA before improving to 5-19.

“We beat ourselves,” said LaVine, who had a game-high 22 points. “We got to make more plays down the stretch to where we don’t have to have it on a last-second shot.”

The final minutes will be what the Bulls replay most in their minds. A chippy game that featured Bulls wing Denzel Valentine’s first career ejection at any level was tied at 97-all with 3:36 left after Lauri Markkanen hit a 3-pointer. It was a slog from there.

The Warriors scored the go-ahead and final basket with 1:03 left, when Glenn Robinson III threw down an alley-oop pass from Draymond Green, who had plenty of space to survey the floor after the hyper-aggressive Bulls blitzed D’Angelo Russell on a pick-and-roll. Russell slipped a quick pass to Green.

“That’s what we felt was the best situation for us, to get the ball out of D-Lo’s hands and make somebody else make a play,” Boylen said.

Even if that’s Green, a three-time All-Star and a superb passer?

With hindsight to his advantage, Bulls center Wendell Carter Jr. – the anchor of the defense and perhaps the team’s most cerebral mind – wished the play had been defended in another manner.

“It was such a fast pace and so fast in the moment,” Carter said. “In my opinion, I probably would've told him, you know let's try something a little different, maybe a 1-through-5 switch because open shots are going to beat us, not mismatches. You know what I'm saying? If we 1-through-5 switched, Draymond would never have caught it in the pocket and then D'Angelo would've had to go one-on-one from the top of the key, which we have a better chance of guarding instead of two-on-one on the back side. It's just something that happened in the moment. There was like two minutes left in the game. Everybody was running around trying to stop the ball, trying to do something to help the team win. I don't think it was anything that could've been done differently.”

The Bulls had a chance to tie or win it on their final possession, and LaVine chose to go for the latter. Taking a timeout with 13 seconds left, Boylen drew up a play to let LaVine create. The Bulls didn’t want Green involved in defending the ball, so when he guarded Carter, the screen setter, LaVine twice waved his teammate off to instead start an isolation journey from just inside half-court.

LaVine drove left and pulled up for a clean-but-long attempt off the dribble. It was off its mark with 2.0 seconds left and bounded away harmlessly.

“I just thought that was a good shot,” LaVine said. “I’ll take it again next time – I’ll think I’ll make it too.”

LaVine explained he let the clock wind down so the Warriors wouldn’t have a chance for another possession. Considering that eschewed conventional wisdom with his team trailing, LaVine was asked if he wished he would’ve attacked earlier to give his team a chance at an offensive rebound.

“Yeah,” he said. “The timing of it maybe could be better, but it’s a rhythm thing. It’s how you feel. He’s done a good job of that, and I believe in him in that situation. Tonight it didn’t go down. We’ll learn from that and move on.

“He can make that shot. His PPP on that shot is as good as anybody in the league. He’s made it before.”

When it was over, the Bulls could only rue another missed opportunity. Life gets tougher from here, with a back-to-back awaiting against the Heat (16-6) and Raptors (15-6) on Sunday and Monday, respectively.

“We’re disappointed we lost this game, all of us,” Boylen said. “We don’t like losing, but my job is to keep this thing going in the right direction and I feel we’re growing and we’re developing.”