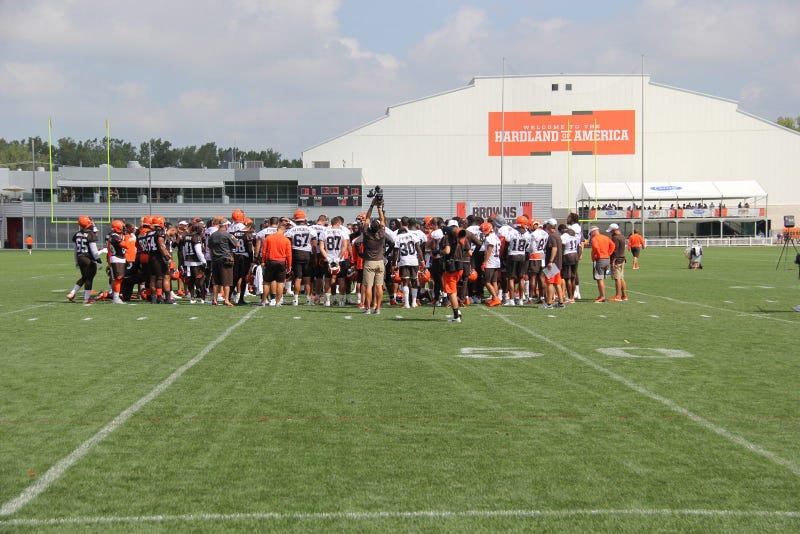 Berea, Ohio (92.3 The Fan) – Training camp ended Wednesday in a fitting way for the Cleveland Browns.

With a missed field goal.

18 practices later and two preseason games, we still don’t have an answer to either question.

“We still have some spots that need to be earned and won,” Kitchens said. “If you are trying to win a spot, you have to also say that there are some spots that can be lost. At the end of the day, we have four practices and two games left now. The sense of urgency with everybody surrounding the organization needs to increase.”

It was Greg Joseph that missed the last kick – a 49-yard simulated potential game winner try – that was the final snap of the four-week camp. Joseph, who competed with rookie Austin Seibert, made six of his eight kicks during team work. He was also wide from 53 while making from 27, 33, 40, 43, 41 and 46 yards.

Seibert, selected in the fifth round of the 2019 NFL Draft, has largely been a disappointment. He too went six of eight missing from 46 and a 38 yarder that came during a kick protect-rush fundamental drill, but he made his 49-yard simulated game winner.

General manager John Dorsey may be combing the waiver wire on Sept. 1.

Eric Kush appears to have a hold on the starting right guard job but that is hardly set in stone.

Kush will likely start Friday night at Tampa Bay, an indicator he’s the favorite, after spending the last three weeks taking most of the first-team reps in practice and games.

Drew Forbes still has an outside shot at the job but Austin Corbett, selected 33rd overall in the 2018 NFL Draft, has been a disappointment. Corbett entered camp as the presumed favorite, but he’s been relegated to backup center duties with the twos, threes and scout team offense mostly.

Award winner – Linebacker Mack Wilson was named the 2019 recipient of the Maurice Bassett Award, voted on by the local writers and given to the most outstanding rookie in camp.

Wilson’s presence was felt just about every time he was on the field and he may have set a record for training camp interceptions.

Highlight machine – Odell Beckham Jr. might not have participated in team drills the last two weeks of camp, but the receiver still managed to put on a show for fans.

Beckham, who has been bothered by a minor hip injury, made the one-handed catch routine during individual and positional drills. He’s expected to be full go for the opener Sept 8.

“Just because he is not out there during team drills does not mean we are not getting work done,” Kitchens said.

To make room for Miller, tight end Mik'Quan Deane was waived with a non-football illness designation. The reason the Browns needed to add Miller was receiver D.J. Montgomery, who had a strong camp, was placed on injured reserve with a hamstring injury allowing the addition of Meander.

Feeling better – Garrett was back on the field Wednesday, a day after missing practice due to an illness.
Thank you – Kitchens opened his daily press conference with a thank you to the fans who attended each of the team’s 15 practices that were open to the public in Berea.

“I just want to start by thanking our fans,” Kitchens said. “This was the last day that they come out. We tried to get as many open practices as we could. The support was tremendous as you guys probably can tell. We never lacked of any fans being out, and I think the last day was just as many as the first. It was really special.”