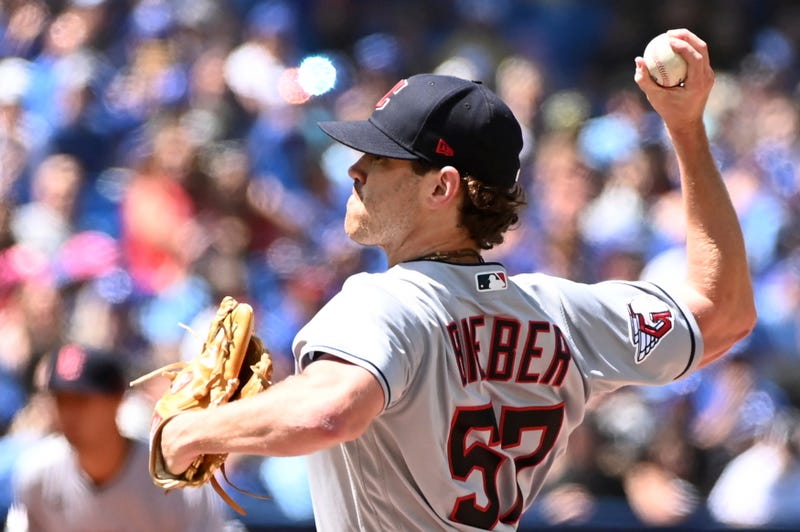 Rosario went 3 for 4 with a walk, two RBIs and three runs scored. Owen Miller had two doubles and Austin Hedges drove in a pair as the AL Central leaders won for the seventh time in eight games. Cleveland’s season-high, six-game winning streak was snapped in Saturday’s 2-1 loss.

Bieber (8-6) allowed two runs and eight hits, equaling a four-game winning streak from June 17 to July 3, 2018. He walked none and struck out six.

Trevor Stephan struck out two in the eighth and Emmanuel Clase finished.

Toronto lost two of three to Cleveland and scored just four runs in the series. The Blue Jays had three hits in the first inning but scored one run, stranding runners at second and third.

Blue Jays right-hander Kevin Gausman, chosen AL player of the week last week after pitching 14 scoreless innings in starts at Tampa Bay and Minnesota, couldn’t keep his streak going at home. Rosario connected on a one-out drive in the first for his eighth homer.

Gausman (8-9) allowed five runs and nine hits in 4 2/3 innings. He walked one and struck out five.

A wild pitch cost Gausman in the fifth, allowing Rosario to advance to scoring position and come home on Josh Naylor’s single. The Blue Jays also made an errant throw on Tyler Freeman’s stolen base attempt in the fourth and, on the next play, right fielder Cavan Biggio couldn’t get to Hedges’ fly ball down the line. The ball dropped for an RBI double.

Teoscar Hernández tied it in the bottom half with an RBI double, but Hedges made it 2-1 with an RBI single in the second, then doubled home a run in the fourth.

Naylor hit an RBI single in the fifth before Miller chased Gausman with a two-out RBI double.

Vladimir Guerrero Jr. cut it to 5-2 with an RBI grounder in the fifth. Guerrero finished 0 for 4, ending his career-best hitting streak at 22. He grounded out to third to end the seventh, stranding runners at first and second.

Rosario and José Ramirez hit RBI singles off Trent Thornton in the ninth.

Blue Jays: SS Bo Bichette (rest) was held out of the starting lineup. Bichette has played in 111 of Toronto’s 113 games.

Cleveland has won nine of Bieber’s past 11 road starts.

Guardians: RHP Aaron Civale starts Game 1 of Monday’s doubleheader against Detroit. His opponent will be RHP Drew Hutchison (1-6, 4.45). Cleveland has not named a starter for Game 2, when RHP Bryan Garcia (0-0, 2.35) is scheduled to start for the Tigers.