The consensus around the NFL is that the winner of this year's Thanksgiving showdown between the Cowboys and Giants could also win the services of Odell Beckham Jr. But, regardless of which team enters this weekend in sole possession of second place in the NFC East, the free agent wide receiver is expected to talk business with the Cowboys rather soon.

Prior to kickoff at AT&T Stadium, Fox Sports NFL insider Jay Glazer reported that Dallas has tentatively scheduled a meeting with Beckham for next month, on Monday, Dec. 5. Glazer also mentioned that New York has yet to determine whether they'll meet Beckham in the coming week, or after his Cowboys visit.

Is this the Beckham Bowl??@JayGlazer has the latest on when OBJ will be visiting both the #Giants and #Cowboys ⬇️ pic.twitter.com/BUDNhoETcz

Beckham, who's recovering from a left ACL injury suffered in Super Bowl 56, was drafted 12th overall by the Giants back in 2014. The 30-year-old wideout played five seasons in New York, racking up 5,476 yards and 44 touchdowns over 59 games. Earlier this week, Cowboys owner Jerry Jones told 105.3 The Fan that the franchise is holding out hope in acquiring the veteran Beckham. 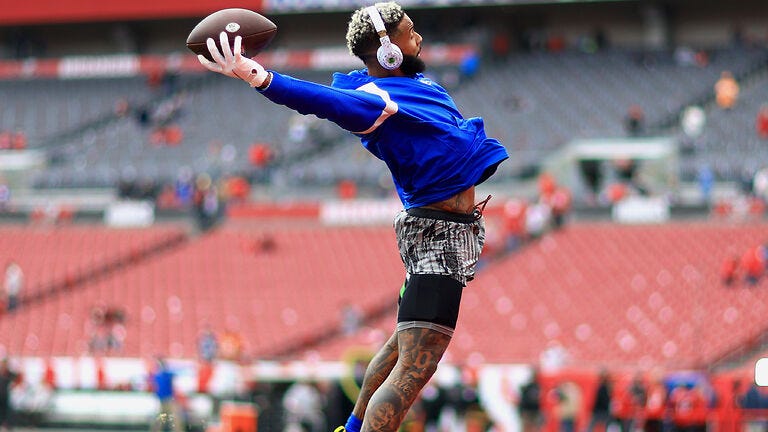