Cooper Rush is now 3-0 as a starting quarterback after disposing of the Giants on Monday Night Football. The Cowboys now sit at 2-1, with another divisional game against the Commanders next week.

Here is our Cowboys insider Bobby Belt’s thoughts from his quarter-by-quarter game journal.

14:27 Big credit to Noah Brown for a block that freed up Tony Pollard for 14 on the reverse. Brown has been doing it all for this team the first three weeks.

12:41 Cowboys see a promising start to the drive fizzle. Farniok gets flagged for holding on 2nd and 8, followed by a bad overthrow from Rush to Jake Ferguson on 2nd and 18. Cowboys are forced to punt following a 4-yard gain from Peyton Hendershot on 3rd and 18. Cowboys could have really made a statement by scoring on that opening drive.

Great job by Micah Parsons and Quinton Bohanna to team up on the run stop on 3rd and 2. Parsons showing no negative effects from the illness that held him out of practice.

10:51 Tough penalty from Anthony Barr. Cowboys get a stop thanks to a 3rd and 2 drop from Barkley, but Barr held him off the line of scrimmage. Automatic first down for the Giants. Hate to see drives extended like that.

8:35 Daniel Jones does a nice job threatening the run and keeping Diggs distracted in coverage. Daniel Bellinger ends up wide open and picks up 20 yards and an easy first down.

7:59 Diggs is getting close to his first interception of the year. Back to back passes that were nearly picked set up 3rd and 10 from the Cowboys 29.

7:55 Cowboys bring 7 and quickly force Daniel Jones to get rid of the ball. Nice job by the defense to bend without breaking. Dorance Armstrong ensures the Giants come away scoreless by blocking Graham Gano’s 47-yard field goal attempt.

6:39 Noah Brown continues to impress with Michael Gallup out of the lineup. He makes a great leaping grab to pick up 19 and get the Cowboys inside the Giants 30.

4:53 That’s a tough catch from Noah Brown on 3rd and 3 there. Brown has earned the snaps to remain in the starting lineup with Lamb and Gallup when the Cowboys get back to full strength. Brown has 7 receptions for 110 yards and 7 first downs on 3rd and 4th down this season.

2:12 Sloppy end to the drive for Dallas. Ezekiel Elliott is unable to get much inside the 10, followed by a couple of 3rd down penalties. Cowboys are forced into a 26-yard field goal, which Brett Maher converts for a 3-0 lead.

0:55 Cowboys give up their third 3rd down to the Giants of the quarter. A quick throw to Sills on 3rd and 5 keeps the drive going. Cowboys look like they’re having Micah Parsons play a lot more traditional linebacker today than the first two games.

15:00 Another third down conversion from the Giants. This time it’s a 3-yard run by Breida on 3rd and 1. Cowboys have failed to get off the field four times on 3rd down now. Three conversions and a penalty.

12:39 Nice play by Dorance Armstrong wrapping up Daniel Jones on an attempted scramble. He’s had a good couple of games here to start the season.

11:27 Cowboys with another chance to get off the field on 3rd and 5 from the Dallas 24. They manage to do so this time. Cowboys brought a lot of pressure and Donovan Wilson did a good job getting his hand in Daniel Jones’ passing lane to break up the pass. A 42-yard field goal from Graham Gano ties the game up at 3.

11:11 Jason Peters with his first appearance of the game at left guard, and he does a nice job giving a block that helps spring Pollard for a big gain of 46.

9:12 This has been all too common from the Cowboys on the first three drives. They have a dynamic start and then fizzle in Giants territory. Referees miss a pass interference call on the pass to Noah Brown on 3rd and 3 from the Giants 10. Brett Maher puts the Cowboys ahead with a 28-yard field goal.

7:38 First three and out of the game for either side. Cowboys defense did a great job on that drive. Micah Parsons was on the sideline for the first two plays, but came in to pass rush on 3rd and 13 and absolutely lit up Daniel Jones. Jones was just able to get the ball away.

6:11 Cowboys put themselves in some awful field position with a couple of penalties. Peyton Hendershot gets hit with a holding call on a run from Pollard that picked up a first down, and then Tyler Smith gets a false start the very next snap. Took them from first down to 2nd and 20 from inside their own 15.

5:10 Great block from Tyler Smith to free up Ezekiel Elliott for a big 27-yard run on 3rd and 12. Smith has been fantastic run blocking this year.

4:39 Absolutely no excuse for that drop from CeeDee Lamb. Lamb got free in the secondary and Rush put it right on the money about 40 yards down the field. Lamb with a flat drop.

2:43 Another drive burns out for the Cowboys. Giants bring a lot of pressure and tip Cooper Rush’s 3rd and 10 pass at the line of scrimmage to force a punt. Every drive has felt like it was heading for a touchdown, and yet the Cowboys only have two field goals to show for it.

1:15 Giants are able to make a few plays against the Dallas defense in the final two minutes of the half. First it’s a 10-yard scramble from Daniel Jones, followed by a 14-yard completion to Richie James up near midfield. DeMarcus Lawrence manages to sack Daniel Jones on the next play to hopefully kill some of the momentum. That’s Lawrence’s second sack of the half.

0:42 Good job in coverage by the Cowboys defense. Daniel Jones didn’t have anywhere to go with it on 2nd and 13 and had to throw it away with Parsons closing fast.

0:35 Daniel Jones does a great job maneuvering the pressure and delivering a big throw on 3rd and 13, but Sterling Shepard gets flagged for offensive pass interference to kill the conversion. Shepard lit up Diggs who was slow to get up.

0:00 Chaotic end to the first half. Giants get a big play from Saquon Barkley to set up 4th and 2 from the Dallas 47 with 10 seconds left. They go for it, fail to convert, and hand the ball back to the Cowboys. Nice catch on the slant from Simi Fehoko to set up a 59-yard attempt from Maher who pushes it a little left. 6-3 lead for the Cowboys going to half. Giants with the ball to start the 3rd quarter. 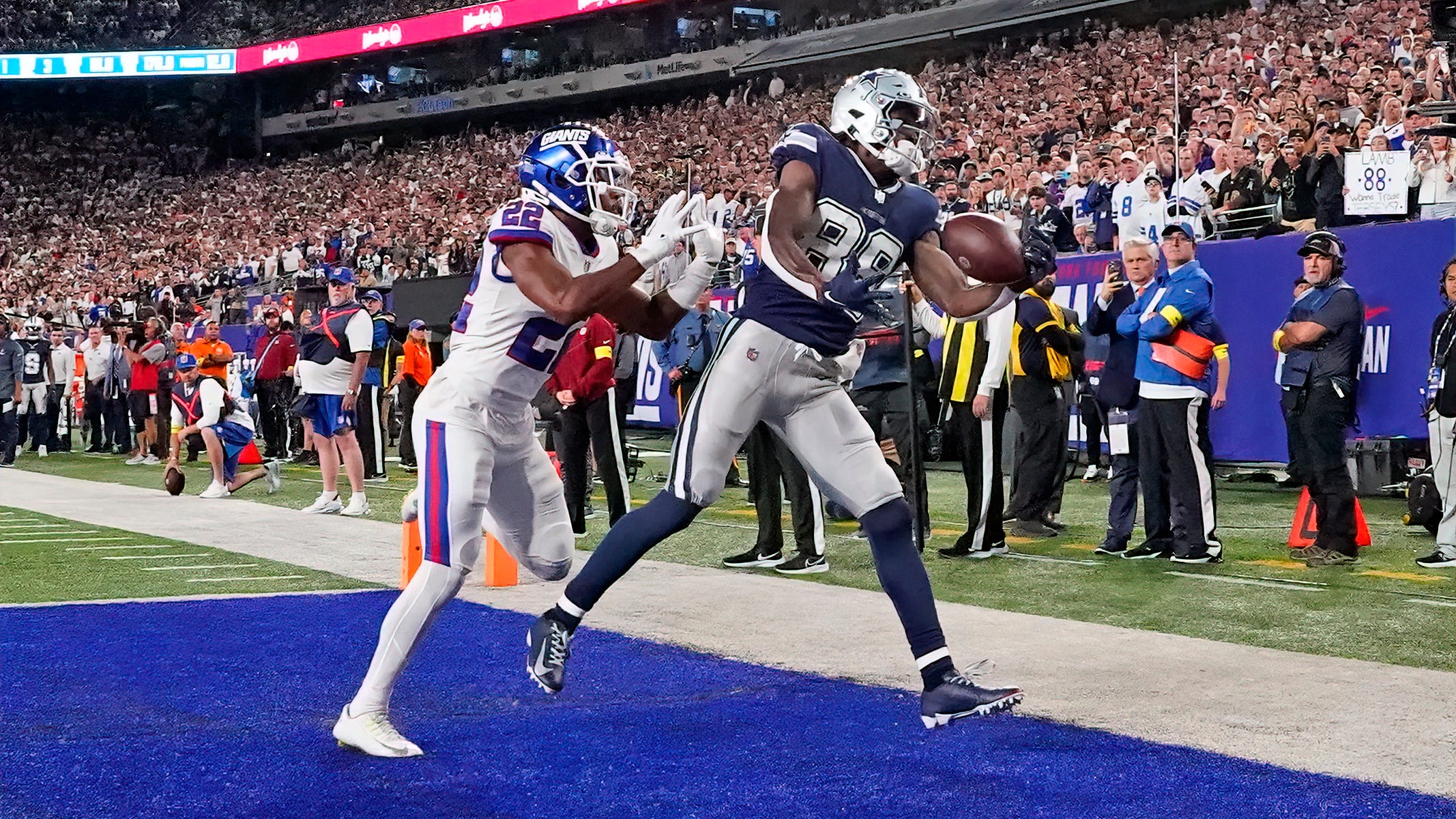 13:43 Cowboys blow a third down stop for the second time tonight with a penalty. This time an illegal contact flag gives the Giants a first down after Dallas had initially gotten the stop. DeMarcus Lawrence’s third sack of the night had put the Giants in a difficult 3rd and 14 before the Lewis flag.

12:12 Big scrambles from Daniel Jones on two of the last three plays, picking up 13 and 17 respectively. Jones hasn’t been great tonight, but he’s shown toughness and made enough plays to keep a few Giants drives alive.

10:55 Big hit by Donovan Wilson on the blitz to drop Daniel Jones for a 11-yard loss. DeMarcus Lawrence comes off the field with what looks like a foot injury however. Lawrence has been huge for the Cowboys tonight, so this one could hurt.

9:06 Giants are unable to overcome the big loss on first down from the Wilson sack, but get into field goal range for Graham Gano, who knocks it home from 51. 6-6 game.

8:13 Cowboys go three and out for the first time tonight. Zeke loses two on first down, then Rush can’t connect with Lamb deep down the right sideline, and then it’s a drop from Jalen Tolbert deep down the same right sideline. Feels like momentum is swinging to the Giants.

7:32 Daniel Jones continues to kill the Cowboys on the ground. This time it’s a 14-yard scramble and a first down to get the Giants up to their 38. Cowboys just haven’t been able to keep Jones contained.

5:41 Saquon Barkley with a hell of a run to score the game’s first touchdown. Anthony Barr, Malik Hooker, and Donovan Wilson all had a shot at him, but Barkley gets free from the traffic and scampers in. 13-6 lead for the Giants.

3:36 Cowboys facing a 3rd and 1 with the stadium as loud as its been all night. Zeke playing fullback gets the handoff and the first down. Big conversion

2:59 Big catch from the undrafted free agent Peyton Hendershot. Nice play design freed up Hendershot down the right side. Nobody within five yards of him in any direction. 29-yard gain and the Cowboys are in the red zone.

2:14 Nice job by Noah Brown to take the smoke route and fight for some extra yards. Cowboys have something going here with 1st and goal from the 6.

0:32 Cowboys score their first touchdown since the first quarter of the Bengals game, and Ezekiel Elliott scores his first of the year on a 3rd and goal rush from the 1. Tied up at 13.

14:53 It’s been a struggle getting off the field on 3rd down for the Cowboys at times tonight. Dallas catches a break on 3rd and 6 from midfield, as Daniel Jones throws it a little behind Sterling Shepard, and Shepard has it slip between his hands.

12:25 Good job by Lamb to bounce back and make a couple of big catches the last couple of drives. Nice 17-yard gain there.

10:32 Cowboys fail to convert a big 3rd and 4 from the Giants 41. Cooper Rush is a little off target with his throw to Lamb, which would have been short of the sticks anyway.

10:27 That's a phenomenal catch by Lamb on 4th and 4. Tough catch in traffic in a big spot. That's the biggest play of the game so far.

8:34 CeeDee Lamb with the greatest drive of his career. Came up big when they most needed him to. Lamb with a big 26-yard reception down to the one, and then a back shoulder fade for the touchdown on the next snap. He let the NY crowd hear about it after the play was over too. Big drive and now a 20-13 lead for the Cowboys.

7:49 Sterling Shepard and Kenny Golladay do the Cowboys a massive favor with big drops on back to back pass plays. Daniel Jones was on the money both times, and his receivers refused to help him out.

7:44 KaVontae Turpin was thiiiiis close to a punt return touchdown there. Sets the Cowboys up with great field position at the NY 35.

6:06 Cowboys get a little cute on 3rd and 1. Instead of just riding Elliott, the Cowboys go playaction and Rush is nowhere near Noah Brown on a throw to the left sideline. Cowboys settle for a 44-yard field goal and a 23-13 lead.

3:42 Giants scratching and clawing to keep this one within reach. A 51-yard field goal from Graham Gano brings it to within a score at 23-16.

2:00 Big stop by the Giants on 3rd and 7 out of the 2 minute warning. Jake Ferguson ends up two yards short of the sticks and New York will get a shot to tie.

1:17 Trevon Diggs seals it with an interception. He was so close all night and finally gets one to clinch a 2-1 record for the Cowboys.