The NFL does not want any more tablet tantrums from Tom Brady, or anyone else for that matter.

Jay Glazer of Fox Sports reported on Sunday that the league issued warnings to all 32 teams this week threatening punishment for breaking tablets or other league-issued equipment after Brady reportedly broke two tablets during last weeks Bucs-Saints game.

The 45-year-old was caught on camera spiking the league-issued device out of frustration.

On Sunday, ESPN’s Adam Schefter reported that brady had broken two tablets during the course of the game while a third tablet was also stepped on and broken on the Buccaneers’ sideline.

Brady apologized on social media video earlier this week and joked about it on his podcast with Jim Gray Monday night.

“I’ve had a pretty bad record against that tablet, unfortunately,” Brady said. “I think I forgot the password and I couldn’t log in, so those things can be frustrating.”

Last year Brady had also tossed his tablet in a game against the Saints, although this time it was a much stronger throw.

There were no reports that the NFL disciplined Brady for breaking the tablet, although the league has now made it clear it will not be tolerated going forward. 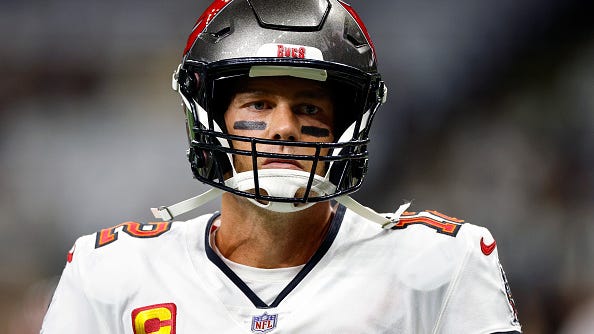