BREAKING NEWS: Chandler & Johnathan Lawson have both committed to the University of Memphis & Penny Hardaway
By Sam Masterson, NewsRadio 1120 KMOX

ST. LOUIS (KMOX) - Despite going 0-2 with a strikeout in his first appearance as the third baseman of the St. Louis Cardinals, Nolan Arenado still seemed to enjoy his day.

Sunday was the Cardinals first game of spring training and Arenado got a standing ovation from the sellout crowd of 1,400 fans that were allowed into Roger Dean Chevrolet Stadium in Jupiter, Fla.

Even in a spring training stadium with reduced capacity, Nolan Arenado still gets a standing ovation before his first #STLCards plate appearance.

Even before the game, Arenado was getting a lot of attention and waved to the fans as he entered the ballpark.

And after the game, the 29-year-old talked about what the first appearance meant to him:

Nolan Arenado after 1st spring game: It was awesome, these fans are great, says his family was pretty stoked about the fan reaction to his introduction and he got a lot of texts about it. He says his wife was in attendance and his parents will be coming to Jupiter soon #STLCards pic.twitter.com/HTAMLrgl3Q

"I definitely saw it. And I definitely heard it. And it was awesome'" he said. "I’ve always had a lot of respect for them on the other side, and now I have them on my side it's a pretty unbelievable feeling. I know my family is pretty stoked. I got a lot of texts about it." 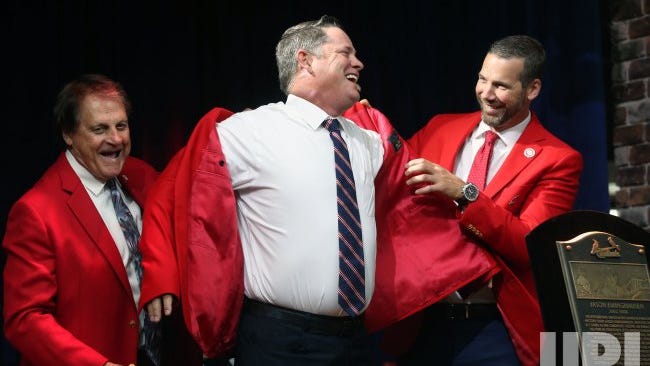 Arenado was called out on strikes in his first AB, then flied out his next time up.

"It's spring training, a lot of us aren't ready to go yet," Arenado says. "My timing is not there yet and I'm still learning these pitchers. I'm still getting my timing down."