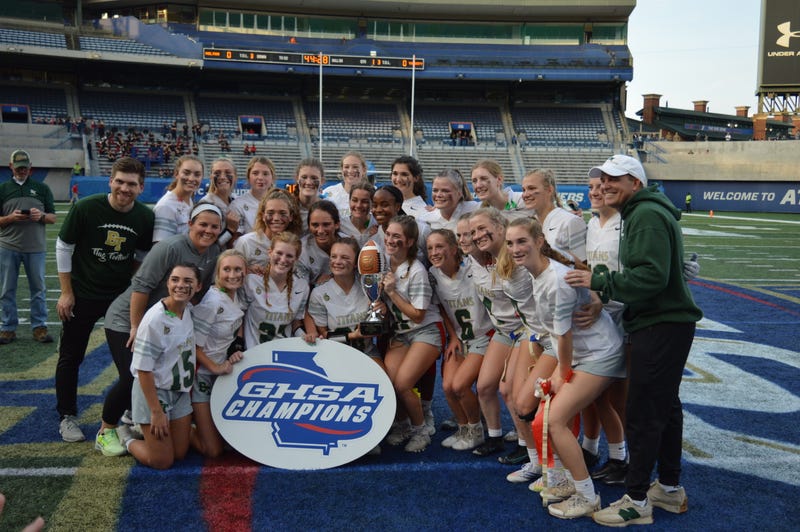 On Thursday, the Georgia High School Association flag football and football state championships kicked off at Georgia State University’s Center Parc Stadium, with the flag football three division championships getting the day started. The Division I title game would see the Southeast Bulloch Yellowjackets win their second consecutive championship as they defeated Harris County 13-0. The win made for the Yellowjackets also going unbeaten in back to back seasons as they finished 20-0 after completing the 2021 season at 19-0.

After taking a 7-0 lead into the locker room at the half, Lithia Springs would add on another score as Minnex would connect with Jayden Graham for a passing touchdown and with the extra point, Lithia Springs would take a 14-0 lead and eventually win by the same score. The win would see Lithia Springs complete their perfect season at 19-0 and give them their 18th shutout victory of the season as they only allowed one touchdown the entire season. “It’s a wonderful feeling, I’m so proud of my girls. This is an exciting moment,” Lithia Springs head coach, Kendra Pleasants said after the win.

In the Division III championship, the Blessed Trinity Titans took on the Milton Eagles in a rematch from their regular season matchup back in October, which the Titans won 20-6. While Blessed Trinity struck first in the first half with a Julie Geis touchdown pass to Jaclyn Johns helping the Titans take a 7-0 lead, the Eagles defense would maintain and keep the Titans from reaching the end zone throughout the remainder of the first half. In the second half, Milton would finally put together a drive that would result in a touchdown as Lindsey Gergans would connect with Nora Megenity and with the extra point, the Eagles would tie the game 7-7.

Regulation would eventually end with the game stalemated at seven all leading to overtime, which the Titans would score on second goal after a Geis touchdown pass to Emma Elizabeth Hudkins. They would fail on the extra point attempt, however would take a 13-7 lead. The Eagles would respond with a touchdown of their own and would too miss fail on the extra point so the game would go into double overtime. The Eagles would have the first possession and on third down, would fumble the ball as they tried to cross the goal line, resulting in a touchback.

On the ensuing Blessed Trinity possession, the game would come to an end as Geis would connect with Johns for a touchdown for the second time of the time giving them the 19-13 win. “It was just a great atmosphere. Our fans showed up, so did Milton’s and it was such a good team. We just knew it was going to be a test and we’re glad we came out on top,” Blessed Trinity head coach Brandon Harwell said after their win.