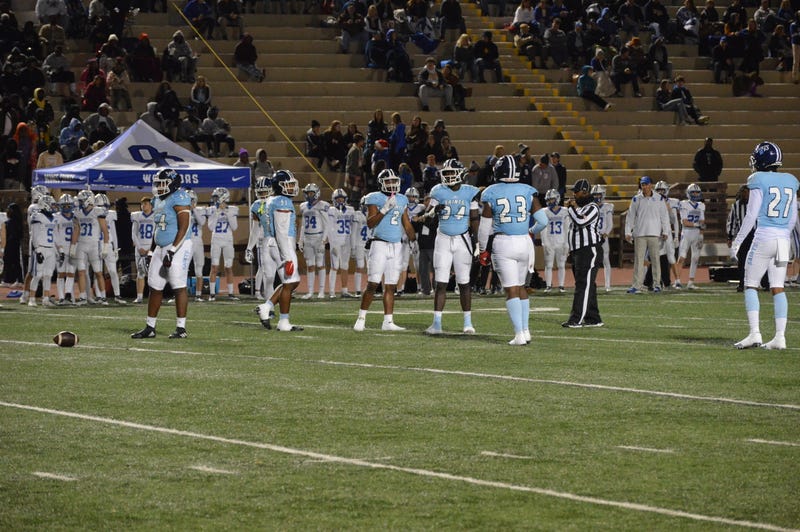 On Friday, the Cedar Grove Saints continued their 2022 title defense a s they hosted the Oconee County Warriors in a Georgia High School Association Class 3A semifinals matchup. As the game got underway, both teams saw their defenses making their presence felt early on. On the opening drive of the game, the Saints would use seven minutes and 19 seconds to march down the field deep into Warriors territory. However, after a couple of penalties against Cedar Grove pushed them back, the Warriors would force them to attempt a field goal which they would miss.

Not to be outdone, the Saints defense would not allow Oconee County to get out of their own territory and after a bad snap would put the Warriors in a third and long situation, Cedar Grove’s defensive pressure would force quarterback Mac Ricks take scramble back into the Warriors end zone and a pass attempt would be ruled intentional grounding and the Saints would go up 2-0 courtesy of the safety. However, Cedar Grove would not be able to capitalize on the ensuing possession as the Warriors defense would come up with another stop after Billy Lewis would intercept a Elliott Colson Jr. pass in the end zone.

And while the Cedar Grove defense had a dominating performance all throughout the game, the Saints offensive line played a very big role as they allowed Cedar Grove to put together multiple drives that allowed time of possession to be heavily in their favor. In the second quarter, after forcing the Warriors to punt, the Saints would drive down field with a mixture of run and pass plays and would eventually cap the drive with a two yard touchdown run by Colson Jr. taking a 9-0 lead. The third quarter would being would the Saints defense coming up with another big stop on the Warriors opening drive of the quarter.

Forcing the Warriors to have to punt, senior defensive end, Adonijah Green would be penalized for running into the kicker, however with, because the penalty only added five yards for Oconee County, the Warriors would still need four yards for a first down and proceeded to punt, but this time Green would come up with a clean block as the Saints would recover and return down inside the five yard line. And with positioned to score, the Saints would another touchdown on a Jakarri Ponder run, taking a 16-0 lead after the extra point. Cedar Grove would later at a Demarcus Smith rushing touchdown in route to a 23-0 win.

“Just like I told them, it’s a communication aspect,” Cedar Grove head coach, John Adams said after the game as he praised his defensive players for how well they communicate with one another on the field and prepare for games. “They study film and they’re gelling right now and it’s just been a groove they’ve been in and they’re working really hard and I appreciate it,” Adams said. The second year Saints head coach also spoke highly of the Cedar Grove offensive line for how well they played up front. “It feels good when you can just punish people in the trenches and I thought we did a really good job in the run game tonight,” Adams said.

Now back in the GHSA 3A state championship game for the second year in a row, next Saturday will also mark the second consecutive season the Saints will face a region opponent for the championship. The Saints defeated Carver-Atlanta in 2021 for the title and next week will take another region foe in Sandy Creek, who defeated Carver on Friday to advance to the championship game. “We’re just going to try to grow from the first game,” Adams said of their 49-34 win over the Patriots back in October. “It’s hard to beat somebody two times, so I think we’re humble and I think we’ve got a veteran group who understands the battle and the opportunity we got going forward so I think we’ll be okay,” Adams said of preparing for Sandy Creek.