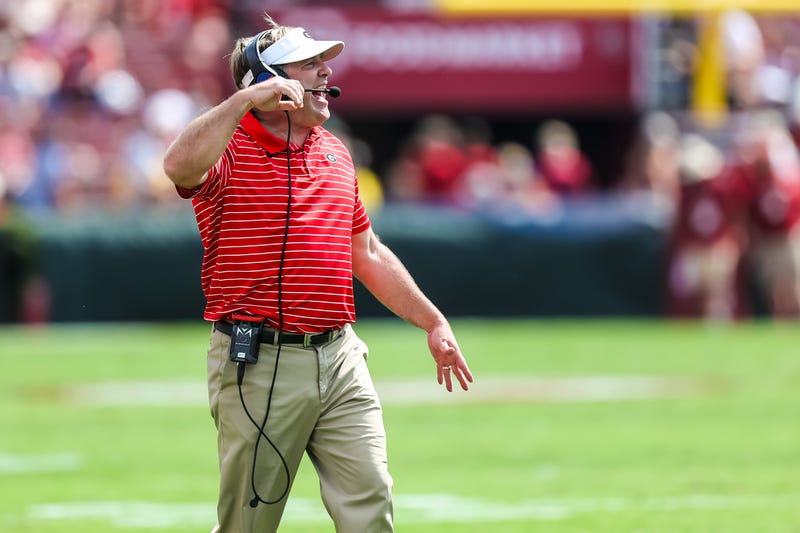 As unlikely as it may seem after losing 15 players to the NFL Draft, the question needs to be asked after three dominant performances. Are the Georgia Bulldogs even better than they were a year ago?

Through three games, the Georgia Bulldogs are outscoring their opponents—which include the then-11th-ranked Oregon Ducks, Samford and an SEC East opponent in South Carolina—by a score of 130-10.

It seemed unlikely after the program hoisted its first national championship trophy since 1980 and lost 15 players to the NFL Draft, but the question is already creeping up. Are the Bulldogs even better in 2022? On 92.9 The Game’s ‘The Steakhouse,’ 24/7 recruiting analyst Rusty Mansell offered his thoughts on the matter.

“Offensively, they are. This is the first time Stetson Bennett’s ever has taken reps in the offseason with the ones. In Todd Monken’s system another year. They’ve got an unbelievable offensive line…[Bennett] is playing like a guy that’s experienced in the system,' he said.

Through three games, the senior quarterback is second in the SEC with 952 passing yards while racking up 5 passing touchdowns and 3 more on the ground.

With the loss of leaders like Jordan Davis, Nakobe Dean and others, Mansell was hesitant to say they’ve gotten better on the defensive side of the ball, but it’s clear to him they have improved in a certain aspect of the game, largely thanks to one player.

“They’ve gotten faster, and I’ll tell you why. They’ve inserted a super freak at safety in Malaki Starks, and he’s got two picks already. Then you take Javon Bullard, who’s playing the STAR position for them, and is faster than the guy that was there last year. So, you’ve got team speed all over the place, but in the backend where Alabama got into UGA last year in the SEC Championship game, now you put a guy back there that is going to be an NFL first-rounder in Starks," Mansell said.

The Bulldogs take on Kent State this weekend before returning to their conference schedule in week five on the road at Missouri.