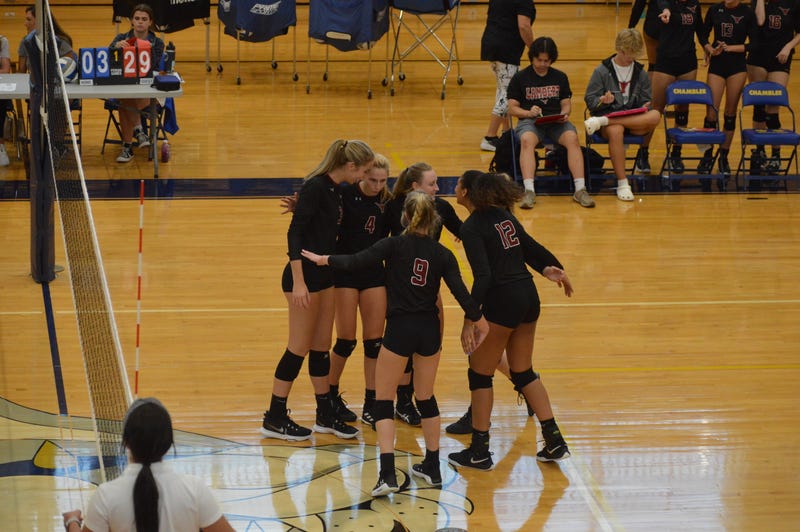 Nothing like getting your season start with two wins out the gate and that is exactly what happened on Tuesday for the Lambert Longhorns as they defeated both the Midtown Knights and host, the Chamblee Bulldogs. After picking up a 2-0 win over the Knights, the Longhorns went to work against the Bulldogs and opened up set one on a 5-0 run.

Chamblee would cut into the Lambert lead and trailed 5-2, but the Longhorns would respond with an 11-0 run to take a 13-2 lead and eventually cruise to a 25-5 win to take the set. The Bulldogs came out in set two with more fight in them and would keep the score close, event leading the Longhorns twice early on in the set.

But after a six all tie, the Longhorns would begin to open up going on a quick 9-3 run to take a 15-9 lead and would eventually take the set 25-12. Following the matches, Lambert head coach, Missey Hall said that she was pleased with how her girls performed in their opening matches. “Offensively I was really impressed by out setter, hitter connection, serving was really strong tonight,” Hall said of the wins.

Hall added that her players executed “zones” she called for and the communication was “strong” and defensively, they “passed well so they put it together tonight which I was happy about”. Hall did note that, while the team’s communication was good on Tuesday, she would like for them to continue to strengthen it so that they are “working together through the lulls” in order to have the ability to regroup through breakdowns and staying “consistent through the whole match”, Hall said.