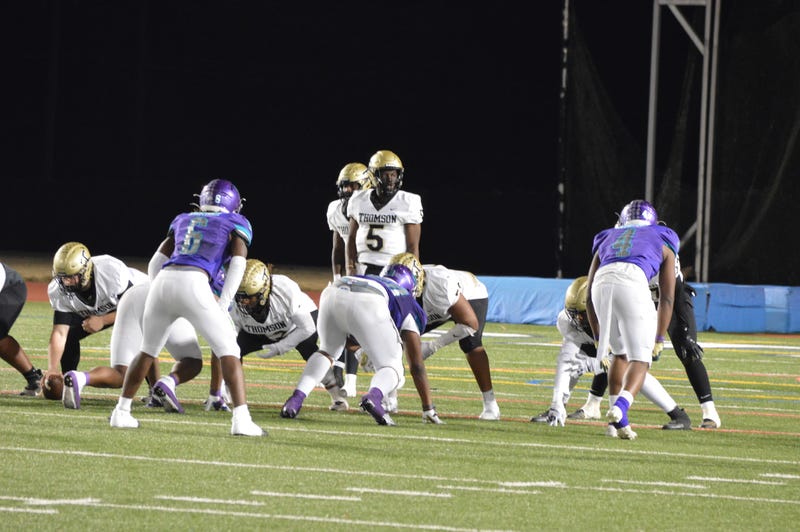 On Friday, the Georgia High School Association football state championship tournament continued with quarterfinals actions and in Class 2A, the South Atlanta Hornets put their perfect record on the line as they hosted the Thomson Bulldogs, who came into the night with just one loss on the season. As the game got underway, the opening drive would see Thomas getting off to a pretty good start offensively but the Hornets defense would come up with a stop, forcing the Bulldogs to punt.

On the ensuing South Atlanta possession, the Hornets would march down the field and cap their first possession of the game with a rushing touchdown by Taye Seymore. The Hornets would fail on the two point conversion, but would take the early 6-0 lead. And while the Hornets would enjoy the early first quarter lead, they would have to do so without star running back, Keyjuan Brown, who suffered an apparent shoulder injury that would keep him out the remainder of the first half.

Yet, South Atlanta would keep the early moment as their second possession of the game would result in a Jontez Adams touchdown pass to Nick Brown, who would have a big impact on defense later in the game, and after another failed two point conversion attempt, the Hornets would lead 12-0. However, the Bulldogs would respond with 14 unanswered points to close the first half as quarterback Jahkiaus Jones would connect with Marcellus Brigham for a touchdown. And with the extra point, the Bulldogs trailed 12-7.

Thomson would then follow up their first score with a Jontavius Curry rushing touchdown and take a 14-12 lead into the locker room at the half. The Bulldogs would come out in the third quarter still rolling as Curry would rush for his second touchdown of the night and with a two point conversion, Thomson would go on top 22-12. The score would remain the same to start the fourth quarter, however Curry would see to it that there would be a change as his third rushing score of the night would help put the Hornets in 16 point hole as they trailed 28-12.

Then the blows would begin to exchange as if the two teams were in the boxing ring. The Hornets would cut the Bulldogs lead down to 28-18, but then Curry would return the ensuing kickoff back for his fourth touchdown of the night. South Atlanta would respond with another touchdown on the ensuing possession and with a two point conversion, trail 35-26. Then, getting a much needed defensive stop, South Atlanta’s Brown would pick off Jones and return the interception for a touchdown and the Hornets would trail 35-32.

However, Thomson’s Curry would continue to add to his highlight reel, returning the ensuing kickoff for a touchdown for the second time of the night, giving his fifth score and the Bulldogs would extend the lead back to 10 as they would go up 42-32. South Atlanta would once again respond as Adams would score on a quarterback keeper, but Thomson would then run off 14 unanswered for the 56-38 win. “Helluva game, that’s all I can say,” Thomson head coach, Michael Youngblood said after the win as it was clear the back and forth exchange late in the game had him at a bit of a loss for words.

“Neither team quit, we did some great things, they did some great things, but we kept our perseverance and we just kept chopping away, chopping away,” Youngblood said of his teams’ performance in the win over South Atlanta, who he credited for their style of play and how they kept the Bulldogs “off balance a little” throughout the game. “But our kids found a way to get those stops in the end and that’s what matters the most,” Youngblood added. The Bulldogs’ head coach would also give praise to Curry and his performance saying, “He’s one of the most dynamic athletes in the state of Georgia that a lot of people haven’t heard about. And the biggest thing is, when you get a chance to see him play and how electric he is, it’s amazing,” Youngblood said of the senior running back.