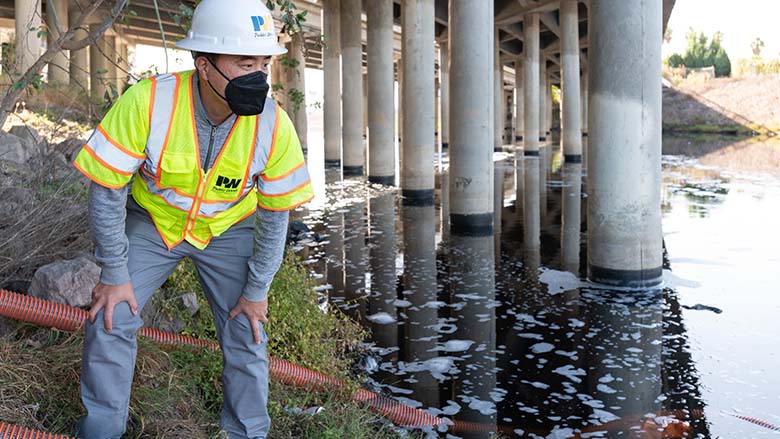 "California Water Service treats the water and tests it before it reaches the tap to ensure that it meets all federal and sate water quality standards," the city said in a statement, adding that recent tests have shown no elevated levels of odor in the water.

In regards to recent reports of discolored water coming from bathtubs and toilets, the city said its sewer lines have no connection to the Dominguez Channel or the odor incident, but have asked residents to call 800-675-4357 to report such instances.

Getting Dominguez Channel-Related Reimbursements from L.A. County
To date, the county has put 26 households into three hotels, and will extend those stays as the odor continues, Pestrella said. In all they have responded to 1,749 calls to the 2-1-1 Call Center, 1,000 calls to Public Works and 1,157 visits to the Carson Community Center.

In addition, Pestrella said 2,930 reimbursement requests have been filed and the county has approved 857 of them.

"At this point we are now able to take a call and within 24 hours give a response back to the applicant seeking reimbursement to tell them if what they've purchased is something we can pay for," Pestrella said.

For in-person assistance, residents can visit the Carson Community Center from 7 a.m. to 7:30 p.m. seven days a week at 801 E. Carson Street in Carson.
To report odors, call 800-288-7664 or visit www.aqmd.gov/home/air-quality/complaints.

To visit the county's page with all of the information regarding the Dominguez Channel inicdent, click here.