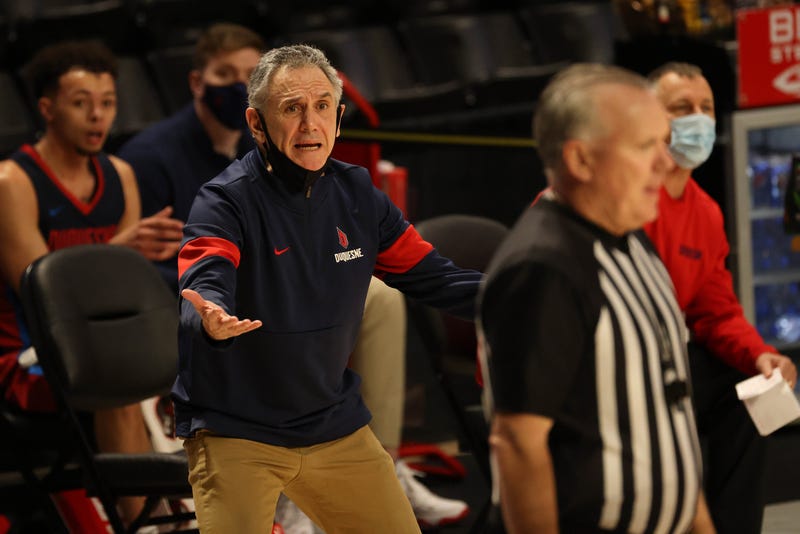 PITTSBURGH (93.7 The Fan) – Coming off an impressive first Atlantic 10 tournament win in six years, Duquesne stunk to start the first half Friday against top seed St. Bonaventure and lost 75-59.

Not that head coach Keith Dambrot was surprised.

“Our issues today were predictable,” Dambrot said.  “I feel like we got what we deserved.”

Dukes shot 28% totaling 19 points in the entire, what Dambrot called ‘pitiful’, first half.  While managing to cut the 21 point halftime deficit to 8 in the second half, the Bonnies pulled away to eliminate the Dukes.

“We fought hard to get back in it,” Dambrot said.  “And died on the vine again.”

Dambrot said over-and-over following the game it falls on him, but said their problems were off the court.

Dambrot thought for a minute when asked about how he fixes the problem going forward.

Dukes finished their twice-paused season 9-9.  In the championship game seven straight years at Akron, winning three, Dambrot has one Atlantic 10 Tournament win and is 65-47 overall.

He vows to make changes

“It will never happen again,” Dambrot said of these inconsistencies.  “I’m going to make sure we have a team full of guys that care about winning.  I will coach them accordingly.”