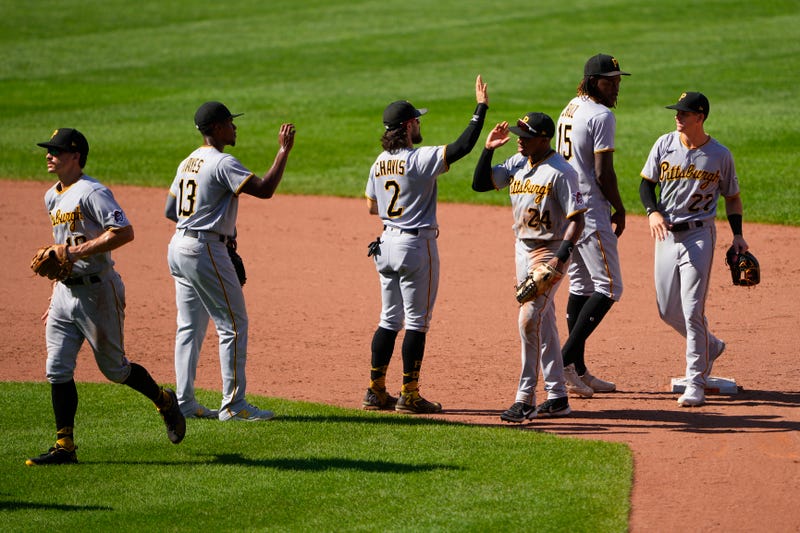 Can this guy be part of the future? When is this team going to be good again?

Those are the two underlying questions that are in almost every discussion about the Pittsburgh Pirates these days. The team is losing and is playing its younger players all over the diamond. So when will it all come together?

Well, I’ve heard this question be asked a lot lately on the Cook and Joe Show and I’ve heard multiple analysts and baseball scribes give their answers.

Jonathan Mayo of MLB Pipeline told us earlier in June, “I think 2023 is the year that no one wants to play the Pirates, like the Padres were a couple of years ago before they were contending. They had young talent and were playing really loose and really good baseball down the stretch. If you were a team trying to contend, you did not want them on your schedule. I’ll say 2024, when you get the bulk of this really good talent that’s in Altoona to the big leagues and established, that’s when I think things can get really exciting here.”

Jon Morosi of MLB Network was told about the Mayo quote and agreed with his line of thinking, saying that 2023 will be close to contention, while 2024 could be the year they put it all together.

Jason Mackey of the Post-Gazette was on the show recently and said, “Next year to me looks like what 2012 was for this team where they might tease a little bit and then just can’t compete because they’re too young or not deep enough, something like that. I think 2024 is the time that enough of these young guys, and especially on the pitching side, should be up here and able to contribute. Mike Burrows who was just in the Futures Game, Carmen Mlodzinski, Kyle Nicolas, Quinn Priester, Roansy Contreras, they should have more arms up here by that point.”

Finally, prospects guru Keith Law of the Athletic, on the Cook and Joe Show as well, was the only one to say a more conservative 2025 as the year the Pirates will be in it.

So it seems like 2024 is the year that Pirates fans should be looking forward to. Now that the timeline is established, by next question is…are they really in line for that?

Let’s start with the infield.

3B: Ke’Bryan Hayes just signed a long term deal and although I’m not thrilled about a .251 batting average, .681 OPS and just 4 HR’s from a third baseman…he’s a defensive wizard and should for a long time and that contract is insanely cheap for a player you’re looking to build around.

SS: The batting average hovering around the Mendoza line ain’t pretty but that swing sure is.
So is that power. And that arm. And that speed. And the fact that he’s driven in just 8 fewer runs than the Pirates’ current RBI leader (Chavis) in just 43 games played. What’s behind though, if he switches positions in the future, is a bit interesting. Kevin Newman looks like a career backup/utility infielder.
Rodolfo Castro just had a cell phone fly out of his back pocket and hasn’t shown any consistency at the plate.

This is a first... Rodolfo Castro's phone fell out of his pocket in the middle of the game 😅 pic.twitter.com/qaPd34qroF

Liover Peguero is the Pirates 4th-best prospect according to MLB Pipeline, he’s in AA hitting just over .260 with 7 HR 40 RBI.
He’s got a 2023 ETA into the big leagues. Seems to be tracking on-time. Oh, and there’s Termarr Johnson, their most recent 1st round pick. Most analysts believe he’ll move to 2nd base and that swing and approach at the plate should do him well in the pursuit to the big leagues.

2B: Tucupita Marcano has shown some flashes, I like his scrappiness. But his numbers don’t wow you. I’m at least willing to see how he develops. Nick Gonzales is #2 on the prospect list at MLB Pipeline with an MLB ETA of 2022. A .247 average with 4 HR 15 RBI in Altoona for him. Keith Law, prospects guru, isn’t a believer at all in him. He doesn’t like the swing and doesn’t think it will translate well to the Majors. Something to keep in mind, for sure. Also keep an eye out for Ji-Hwan Bae who is putting together a solid season in AAA, hitting nearly .300 with 8 HR and an .814 OPS.

1B: Umm…uhh…well…there isn’t an easy answer for the future here. Mason Martin looked like he might be the future, but then he fell off a cliff in Indy. Maybe the answer is Malcolm Nunez, one of the pieces they got back for Jose Quintana. He hit .262 with 17 HR in AA this year. It still could be a problem spot into the future.

C: The clear plan is Henry Davis. You don’t take a guy 1st overall if it’s not. A 2024 expected arrival, his biggest problem has been that he keeps getting hurt. He has played for AA Altoona since July 2nd and he’s only played in 41 games this year. You’ve got to wonder if that time missed will set his timeline back.

OF: Plenty of names, but also some question marks. Will Bryan Reynolds be kept long term? I think they should keep him. Jack Suwinski has obvious power, but he can’t seem to keep that average up even in the minors. There’s Bligh Madris, there’s Cal Mitchell, there’s Canaan Smith-Njigba, there’s Travis Swaggerty all with at least a cup of coffee in the bigs. Hudson Head and Endy Rodriguez aren’t expected until 2024, Lonnie White Jr. isn’t expected until 2025. I don’t know…hopefully a couple of these guys stick and work out.

P: I really like Roansy Contreras. He has a chance to be a top of the rotation piece. Is Mitch Keller finally turning a corner? Maybe. I think he profiles as a middle of the rotation starter, which is ok but not what we’d all hoped. Quinn Priester is the top prospect here. He’s got a 3.07 ERA in the minors and has worked his way up to AA this year. We might see him in 2023. In my eyes, the timeline toward contention in pitching depends on Mike Burrows and Carmen Mlodzinski. Both have 2023 ETA’s and have shown signs of life of a Major League future. And who knows what Bubba Chandler will be, he’s a few years off anyway.

So after seeing all of this, does 2024 still make the most sense for them to try to contend? I look at all of this and wonder if it’s really all going to come together that quickly. There are still so many players that need to develop, not go through extended struggles and contribute to make this all happen by 2024.

I’ll be honest, it seems a little lofty. And the other question is…once they do get some of these prospects to the big leagues and playing well enough, how aggressive will the front office be in supplementing that talent with free agents? That’s always the big question with this franchise isn’t it. For now, I believe in Ben Cherington, I think he’s done well in drafts and he’s moved the right players out of town for prospects in return.

For now. Of course, we’ll see when the rubber meets the road and it’s their time to make this more than just a team looking ahead to the future and instead, a legit contender.