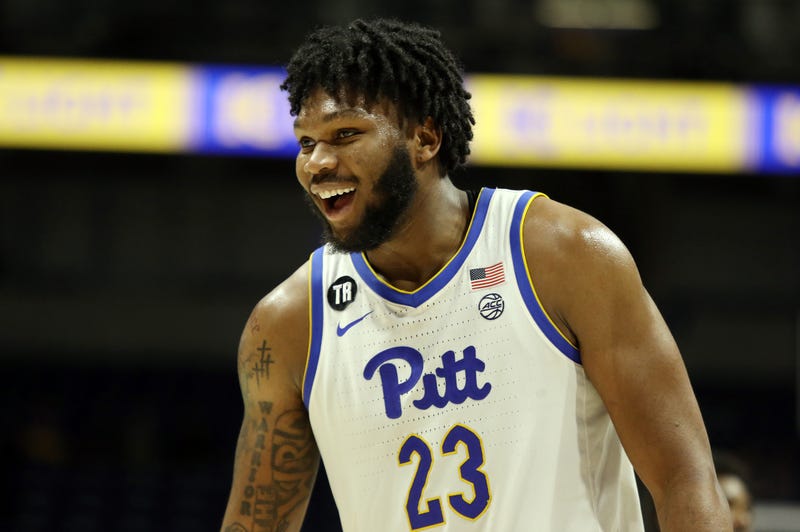 PITTSBURGH (93.7 The Fan) – Not only was Pitt boat-raced in the second half up in Syracuse two weeks ago. Three days ago, the Panthers suffered their worst defeat of the season at Clemson. First half it appeared to be more of the same, until an improbable comeback and a Panthers 64-53 victory.

“Really proud of my team, we responded in a big-time fashion from last game,” said Pitt head coach Jeff Capel.  “I think the thing I’m probably most proud of is the first half.  When we could not make a shot, we did not allow it to affect our defense.  It’s something we have been preaching all year and we haven’t done it all the time, but we did it at a high level today and it allowed us to stay in the game.”

“Even when shots weren’t falling, Coach Capel did a great job motivating us and telling us shots would fall,” said senior Jamarius Burton.  “Let’s not let our defense lapse while we weren’t making shots.  That was the big thing for us, we kept fighting on the defensive end-regardless if we were making or missing.  Shot started falling in the second half for us.”

They did indeed, Pitt made five of its first seven from three, grabbing its first lead.  Panthers kept that defensive intensity when the shots were going in as when they weren’t.  The Orange shooting 1 of 14 themselves in the second half from three.

Mouhamadou Gueye said they were finally able to make Syracuse uncomfortable on offense.  Capel said they were just more physical.  Syracuse shot 30% from the floor for the game, 27% from three, Pitt got 15 points off turnovers and outrebounded Syracuse 45-39 (Panthers were outrebounded in the first matchup).  Ten of those rebounds from Gueye, 18 from John Hugley, to go with 11 points, nearly five below the season average.

“It’s oddly one of John’s best games,” Capel said.  “We talked to him about this when we played at Syracuse, I told him you can have significant impact on the game without scoring.  It can be difficult.  What you can do is score late.  He didn’t do it up there, he really did it today.  He set the tone with rebounding the basketball, playing at the high post, making good passes and having patience there.  Late in the game he was able to get some baskets.”

A 13th consecutive double-figure game from senior guard Jamarius Burton.  He would finish with a team-high 21 points even though he went 1 for 6 in the first half.  Of Burton’s 17 points in the second half, some really crucial moments.

•          After Femi Odukale gave Pitt a first lead, Burton hit a three with 11:42 to play to increase the lead to four and force an Orange time out.  Syracuse would get no closer.

“Jamarius was tremendous, everywhere on the floor,” Capel said.

Missing all four three-point attempts in the first half, Mo Gueye became aggressive taking it to the hoop.  The senior finished with Pitt career-high of 19 points and his third double-double of the season.

“Mo, obviously was terrific, as he settled in the game and found spaces in the zone,” Capel said.

Gueye had only 11 points combined in his previous two games.

Getting a scholarship just two weeks ago, senior Onyebuchi Ezeakudo finished with a career-high 11 points on four of six shooting, three of four from three.  Ezeakudo also had three steals as part of some key moments.

·      After Syracuse took a quick six point lead a minute into the second half, Oni made a three late in the shot clock to cut the lead in half

·      Syracuse cut the lead to four with 8:24 to play, Ezeakudo with another three on the next possession to build it back up to 7.

“O probably had his best game,” Capel said.  “What he did with his defense on Girard.  He’s strong enough that Girard couldn’t bump him off.  O could get under him a little bit and knock some basketballs away from him.  He made some timely three-pointers for us.  He penetrated the zone.  He had great poise out there.  He was huge for us.”

Panthers had an ACC season high 15 assists, getting a helper on 75% of their made field goals.

“It’s beautiful when you move the ball like that,” Burton said.  “Everybody is able to get open shots, great shots, game shots.  We were able to take advantage of that tonight.  We need to keep up with that ball movement if we are going to win the next game and each and every game after that.”

“I thought our guys were incredibly tough,” Capel said.  “I thought we were together.  Big-time strong performances from everyone.”

Panthers on the road for the next two starting Saturday at Boston College at 4p with Bill Hillgrove, Curtis Aiken and Cale Berger starting Panthers pregame at 3:30p on 93.7 The Fan.