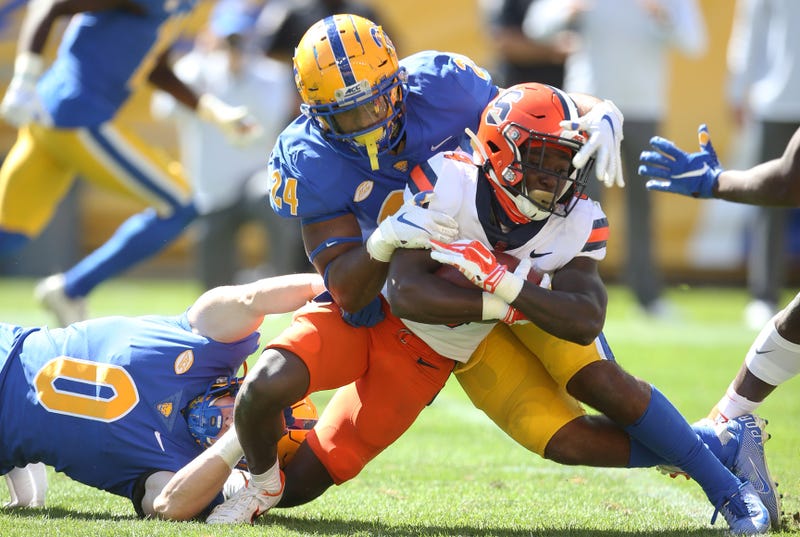 PITTSBURGH (93.7 The Fan) – Will Pitt see the Syracuse team outscored 82-20 over their past two road losses to NC State and Louisville or the one that lost by three in overtime to Wake Forest and a last second field goal to Clemson.

“Syracuse is a good team,” said senior Deslin Alexandre.  “They have a back that’s run for 14-hundred yards and a quarterback that is at 14 touchdowns.  They’re a great running team.  Need to play hard against them and have a good showing.”

Early in the season, college football analysts put Syracuse tailback Sean Tucker as a fringe Heisman Trophy candidate.  He’s far and away the most productive running back in the ACC.  The freshman rushed for 1,467 yards, that’s 296 more than any other player in the conference.  He’s added 12 touchdowns and caught 18 passes with another two touchdowns.

Orange QB Garrett Shrader took over starting duties a few weeks into the season and rushed for 783 yards and the 14 touchdowns Alexandre mentioned.  If you take away the sack yardage counting against his total, Shrader rushed for 957 yards.

“With Tucker and Shrader, those are the two guys we have to stop,” said Pitt head coach Pat Narduzzi. “It's going to be a two-headed monster there. They don't throw it like Virginia, but they're going to try to run it down your throat.”

“They do all kinds of different stuff. But it's quarterback -- they'll run zone read keepers more than anybody that we've seen. I think we maybe have 14 in our breakdown. They want to get him the ball. And they will.”

“We’ve seen a lot of QBs that can move,” said Pitt assistant coach Cory Sanders.  “We faced some guys that can run.  Any time you got a guy that can scramble and extend a play.  You got to make sure you do a good job of not getting lazy downfield, knowing that ball can come at you at any moment.”

“As a defense we have to take great angles,” said defensive lineman Calijah Kancey.  “We have to tackle.  We got to be smart as a D-line in our pass rush lanes.  We are going to get the job done.”

Narduzzi said the Orange have a Top 25 defense, they are seventh in the ACC in points allowed, fourth stopping the run and third best in total and passing yards allowed.

“We've got to protect our quarterback better than we did Saturday. We didn't do a great job, in my opinion. For whatever reason. Whoever's issue there, whether it's a lineman, a running back, a quarterback.”

It’s not a game that will change anything for Pitt’s immediate future.  They will play for the ACC Championship regardless.  Narduzzi said getting to double-digit wins for the first time with the Panthers is a goal, along with keeping momentum going.

“It's been since 1981 -- I think I was a freshman in high school -- that we won ten regular season games,” Narduzzi said. “I think I mentioned it to you guys the other day. It's been a long time. To me, that means something. In 40 years, there's something to prove when we go up there this weekend.”

“It’s another game,” said receiver Jordan Addison.  “That means it’s a big game.  I know I’m not looking ahead, I will make sure the receivers aren’t as well.  We need to make sure we are doing everything on and off the field to be successful.”

“We want to win.  This is a big game.  It’s their senior day, they are 5-6 trying to get into a bowl game.  We got to treat this game as if it is the championship.”