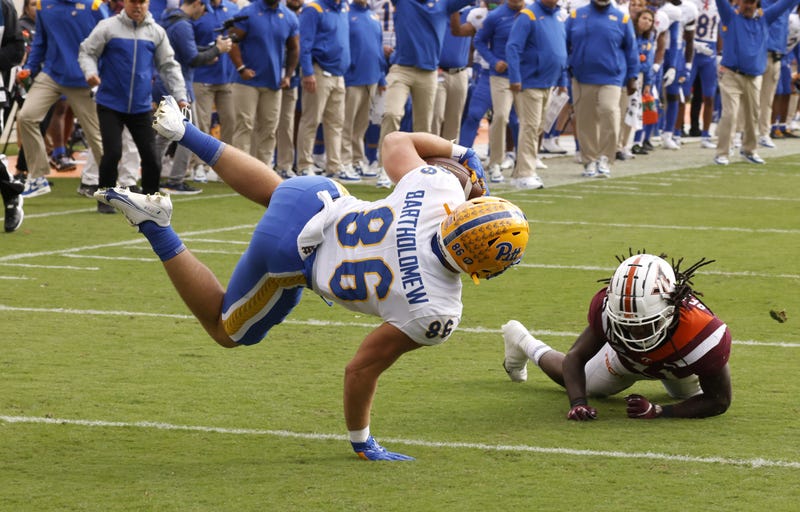 Kenny Pickett battled 20-plus mile-an-hour swirling winds and combined for three touchdowns, two passing and one on a three-yard run to get the Panthers to 5-1 on the season, 2-0 in the ACC.  Pickett 22-37 for 203 yards and he rushed for 38 yards more and converted a third and short and a couple of fourth and shorts with sneaks.

Pickett has 21 touchdowns to one interception this season.

Pitt may also have found a go-to tailback as well.  Coaches have been waiting for Israel Abanikanda to put it together; he had his first college 100-yard game.  The sophomore rushed 21 times for 140 yards, including seven rushes leading to first downs.

The tone set by the defense after Pitt had a three and out on it’s initial position, then nearly got a punt blocked.  Virginia Tech got the ball at midfield, but the defense allowed no yards, forcing a punt.

On that next possession, Pickett drove them 94 yards on 15 plays that included a couple of long third down conversions, one on a 14 yard run by Abanikanda and a fourth and short conversion.  Pickett hit freshman tight end Gavin Bartholomew for an eight-yard touchdown, 7-0 Panthers.

Defense again on the ensuing possession after giving up a couple of passing plays.  The defensive line got great penetration on a fourth and one to stuff Braxton Burmeister for a turnover on downs.

Erick Hallett’s interception at 7:23 of the second quarter gave