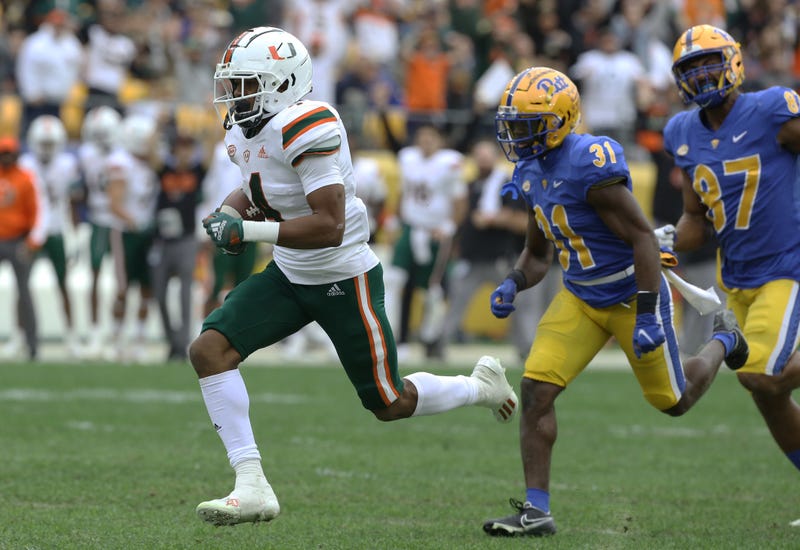 PITTSBURGH (93.7 The Fan) – Since the win there in 1963, trips to Miami have been painful for Pitt football. The warmth felt more in frustration than temperature.

Pitt is 1-12-1 since a win with Marty Schottenheimer and Ernie Borghetti anchoring the offensive line. They’ve been outscored 470-162 or giving up 33.6 points while scoring 11.6 over that span.

Narduzzi discussed all Spring about improving the running game this year. The goal was to have a one-thousand-yard rusher. Israel Abanikanda not only did that and broke Tony Dorsett’s single-game rushing record, he will win the ACC rushing title.

So, Narduzzi has to be pumped?  Found that run game and excelled at it.

While accomplishing that goal of running the ball, there is a little remorse of entering the final week of the regular season without a shot of playing in the ACC Championship game.

“The stats are great and that, but like who really -- the only stat anybody really cares about is how many wins or net win column,” Narduzzi said. “So whatever we’ve got to do to get to that win is what's important. It's not about sacks or yards rushing or throwing or completion percentage, it's about winning. Win clean, win ugly, doesn't matter, just win.
Find a way to win.”

“That's what really matters. Doesn't matter about the run game.”

Entering into that final regular season game at Miami at 8p on 93.7 The Fan on Saturday, this team dealt with adversity. It started during Spring practice when the best receiver in the nation, Jordan Addison, decided to transfer to USC. Camp injury to starting tackle Gabe Houy, in-season injuries to linemen Carter Warren and Owen Drexel, defensive linemen Haba Baldonado, Nate Temple, corner Marquis Williams, receiver Jared Wayne, tailbacks Abanikanda and Rodney Hammond, Jr., quarterbacks Kedon Slovis and Nick Patti (the more serious of the two)-there were others. One of their top four receivers left mid-season.

“No, our guys just keep fighting, regardless of what's going on. The defense was put in four or five sudden change situations the other day and I think were successful two out of the four, or two out of the five. The two interceptions we threw, they got zero points from. We turned them over on downs on one of those, I think the second one.”

“You only get 12 opportunities guaranteed. We've earned an opportunity to have another one, but that doesn't matter. It's like, it's a pride factor. It's about wins. It's about who you are, and I don't see any of that. It shouldn't be a letdown. We get to go play. You either go out there and play well or you go embarrass yourself, and I'm not one for embarrassing myself.”