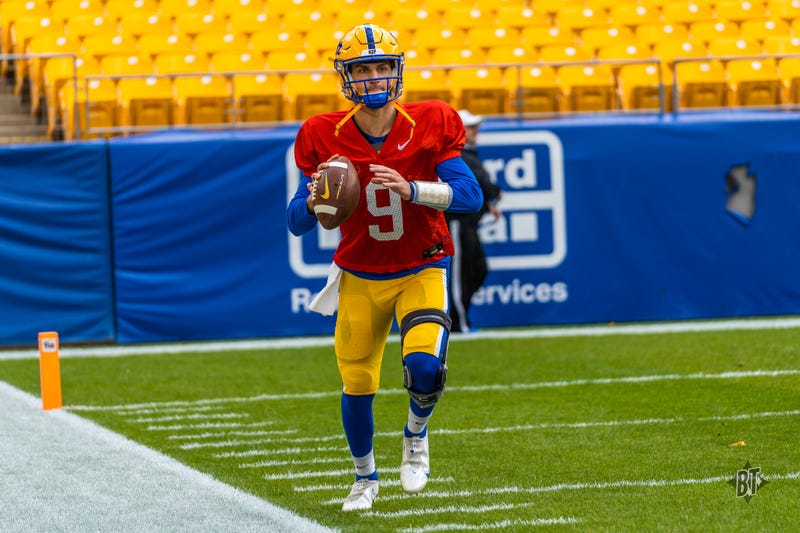 PITTSBURGH (93.7 The Fan) – Kedon Slovis begins training camp in a competition to be the Pitt starting quarterback transferring out of USC. What convinced him to move across the country was not just a job opening, but what he felt was the best chance to win, immediately.

“I was looking for a team to win now and there are only a few teams that fit that mold,” Slovis said.  “The more I looked into it, the more I felt like the players were really good.  The coaches fit what I want to do.  The culture is exactly what I want.  It’s in a good conference.  It checked every box that I wanted.  The only question I had was the OC (offensive coordinator).”

When Slovis committed in mid-December, Mark Whipple had left for Nebraska and Pitt was preparing for the Peach Bowl without an offensive coordinator.  Head Coach Pat Narduzzi said he wanted to wait until after the game to decide, which he did.  Slovis said the Pitt head coach even involved him in the process of eventually hiring Frank Cignetti.

Even though he had already committed, that move confirmed to him he was right.  The 21-year-old said he formed a quick bond with the former and once again Pitt OC.

“It’s been awesome,” Slovis said Monday after the first practice of the season.  “It’s a great system.  He’s coached the best.  He’s coached Eli Manning, Aaron Rodgers and he’s been around the game so long.  The way he coaches it makes it so easy.”

Slovis believes he can play free in his offense.  That it’s the way Cignetti approaches it with a calm demeanor.  It allows him to take control and now he feels like he’s ‘been here forever’ even though it’s only been a few months.

That starting job is not going to be handed to him.  Narduzzi said he will take all the time he needs to decide and says he wants it to become obvious to all who the starter will be.  Slovis is competing with Nick Patti, the fifth-year quarterback who is finally getting a legit chance to start after four years behind Heisman finalist Kenny Pickett.

“Nick’s been awesome,” Slovis said.  “He sent me a text right away (when he committed).  I met him the first day I was in the building.  He’s an awesome guy to be around in the room, to be around every day.”

“Obviously, at quarterback only one guy plays, I’ve been in other situations where it’s definitely been awkward.  That’s not really the situation here.”

He looks at pressure playing at Pitt in the terms that he wants to be elite.  He puts pressure on himself to play well, no matter the situation.  Somewhere though in the back of his mind he tries to remember football is still just a game he’s been playing his whole life.

Slovis also tries to just worry about himself, not bother with what Patti, or any other quarterback, is doing in terms of competing with him.

“I think it’s best to focus on what you are doing,” Slovis said.  “You can get caught up in what other guys are doing.  If you get caught up in that it changes your own game.  I’ve always viewed this, you are in competition, you have to be great.  At the end of the day, do what you do best, he’ll do what he does best and you’ll evaluate it.”

Slovis and Patti work out together, throw together and hang out at times together.  He said it’s easy for them to get along.  They were part of a goal of throwing 10,000 passes with teammates this Summer.  He said he didn’t keep an exact count, but joked it’s more likely 50,000 throws by the end.

Transferring wasn’t easy, Slovis said it was hard leaving his friends and routine at USC.  However, he said he knew once he got here that he made the right choice.

He didn’t want a rebuilding situation.  He knew Pitt had nearly everyone coming back except the quarterback.  Slovis believes he’s that missing piece.

Now he has to go out and earn the starting job.  Following that it’s doing what Slovis says is the most important job for a quarterback.