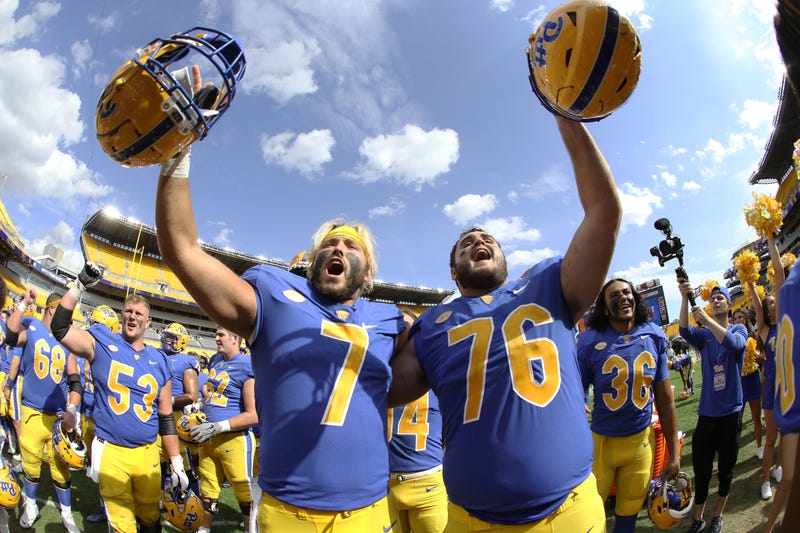 PITTSBURGH (93.7 The Fan) – Pitt head coach Pat Narduzzi opened up his post-game news conference saying ‘that’s what it’s supposed to look like’. He said the Panthers played with the energy lacking against Western Michigan last Saturday.

Panther players said a players-only meeting the day after the loss helped in what you saw.  A 77-7 win against New Hampshire.

Kenny Pickett apparently called the gathering saying it was something that needed to be done.  He said everyone was ticked off.  Pickett believes they got on the same page and ‘squared away’.

“I think he brought us closer as a unit,” said senior corner Damarri Mathis.  “I respect him a lot.  Cleaning up the little things you might not think would get us beat.  In reality, that’s what determines ballgames.”

“After the loss, bringing everyone along and making us closer.  It’s the extra stuff.  The little things that Kenny does.  He’s a great leader.”

“We wanted to right the ship,” Pickett said.  “Obviously last week didn’t go as planned.  We wanted to correct our mistakes and play at a high level.”

“We proved that we could face adversity,” said sophomore receiver Jordan Addison.  “After the tough loss, there was a lot that everybody was going through.  Coming back, and getting that win and putting up those points.  Shows a lot about our offense.”

They did show a lot.  The most points Pitt scored since 1926 when they beat Westminster 88-0.  The most yards ever by a Pitt offense, 707.  Pickett had a third career 400-yard game.  Addison had three receiving touchdowns for a second straight game.

“Really it means a lot,” Addison said.  “We had a tough game last week.  The whole focus trying to come back this week to try and put up as much points as we can to make a statement.”

“It’s a wake-up call,” Pickett saying admitting they not only wanted a win against UNH, they wanted a convincing win.  “You can always spin something into a positive.  There’s a lot of negative people out there always looking for bad in something.  I think if you can look for positives in everything.&