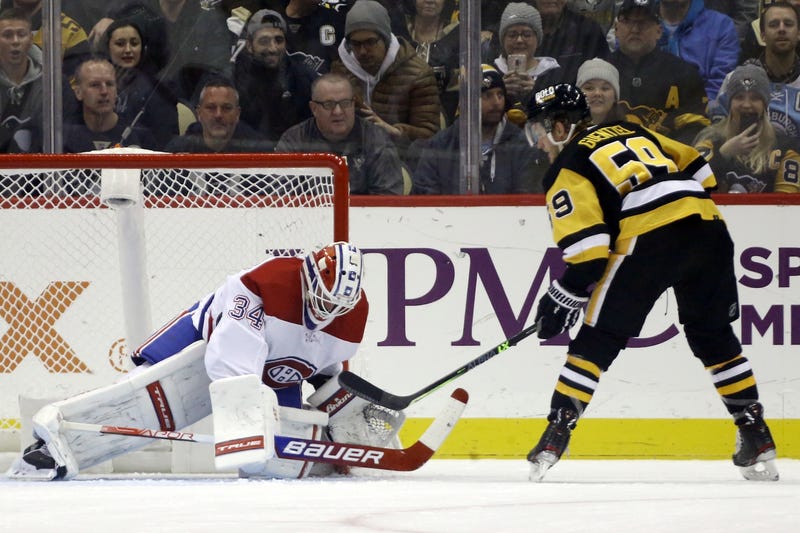 PITTSBURGH (93.7 the Fan) Sometimes you just can’t win them all.

The Pittsburgh Penguins saw their five-game win streak come to an end on Saturday night against the Montreal Canadiens in a 6-3 loss.

The score of 6 to 3 doesn’t exactly tell the whole story, though as the Penguins put up 50 shots and fought to stay in it until the very end.

It was Casey DeSmith in net for the Penguins on the second half of back-to-back contests.

The first period ended with the Penguins leading in shots 14-8.

Late into the second period, after an unreal amount of scoring chances for the Penguins, the Canadiens are the team to break the ice and score first.

Jonathan Drouin scored his third of the year on a breakaway, beating DeSmith who is yet to pick up a win this year.

Evan Rodrigues, who picked up 12 shots in the contest, scored for the Penguins early in the third period of tie the game at one.

Evan Rodrigues goes bar down on the power play 🔥 pic.twitter.com/vAdhLWIoSj

Another power play goal for the Penguins as their special teams continues to show improvement.

The tie game wouldn’t last long as the Canadiens regained the lead 32 seconds later on a goal from Christian Dvorak, and the Penguins would play catchup for the rest of the game.

Atturi Lehkonen scored to make it a 3-1 game in the Habs favor.

Here is where things got interesting for a moment.

With DeSmith pulled and the extra attacker on, Jeff Carter potted one for the Pens making it a one goal game at 3-2 with over two minutes to play.

Jeff Carter gets one back for Pittsburgh late in the third with the empty net!#LetsGoPens pic.twitter.com/dYFksL0Yw1

Canadiens beat out an icing trying for the empty net when forward Josh Anderson scored to make it a 4-2.

The Penguins refused to go away and kept it interesting for another moment when captain Sidney Crosby scored with an extra attacker on to make it a 4-3 contest.

That would be all she wrote for the Pens despite having 1:10 left to play; They failed to tally another shot on goal after the Crosby goal and would let in two more empty netters.

While the Penguins battled until the bitter end, Rodrigues continued his torrid pace, and Crosby picked up three points, the story of the game came from Canadiens’ goalie Jake Allen.

Allen stopped 47 of 50 shots and made multiple highlight reel saves to keep his team in the game.

Over the past few seasons, Allen has become a sort of boogyman for the Penguins; He’s never lost in regulation at PPG Paints arena and now has a 3-3-1 record against them.