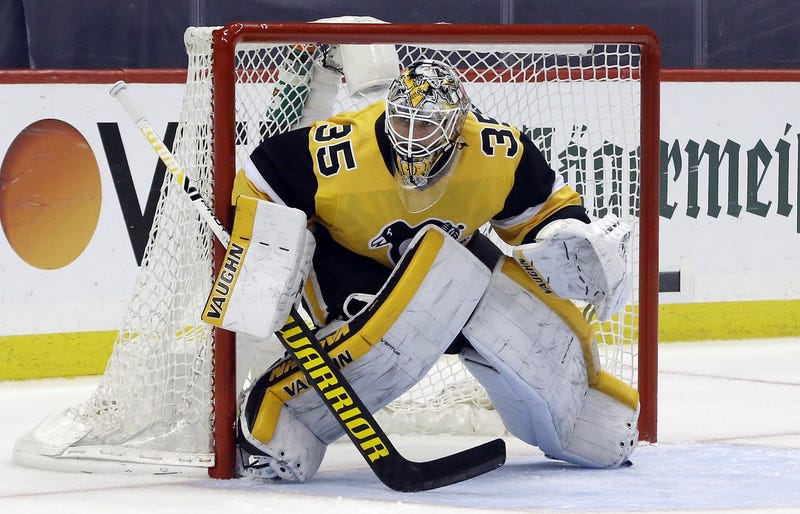 PITTSBURGH (93.7 the Fan) Through six games in the opening round of the 2021 NHL Playoffs, the Pittsburgh Penguins were outplaying the New York Islanders on the ice.

But there was a big fatal flaw that caused the downfall of the series, the play of Tristan Jarry.

The decision making and play of Jarry has been isolated as the sole reason why they lost the series in six games, and that’s not a far fetched reason.

Fans have began pleading for a new goalie to be brought in as the starter or to ship Jarry out all together.

Penguins president of hockey operations Brian Burke joined the Cook and Joe Show Friday morning and stated that he has full confidence in Jarry as the starter in Pittsburgh.

“Yes,” was all Burke said when asked if Jarry was the No. 1 goalie going into camp next season.

Burke would go on to say that one phone call that was good enough could change everything but as it stands, it’s Jarry at the top.

Regardless of what happens with Jarry during the offseason, the Penguins don’t have much goaltending depth to find an in-house option.

Behind Jarry sits Casey DeSmith who has one year left on his contract and isn’t a proven starter at the NHL level.

At third string is Maxime Lagace, who’s contract is up and did hold down a shutout to end the season in his only playing time this season.

Lagace also served as the backup during the playoffs, but with only 18 career games played at the age of 28, he can’t be the answer in goal, either.

The depth options in net are sparce with the recent departure of Emil Larmi who signed with the Lahden Pelicans in Finland.

Beyond the aforementioned names, the Penguins have two recently drafted goalies that they chose in 2020, but they are a few seasons out from breaking into the NHL if they progress to form.

That doesn’t leave many options, it’s Jarry and DeSmith for the time being unless a trade comes along.