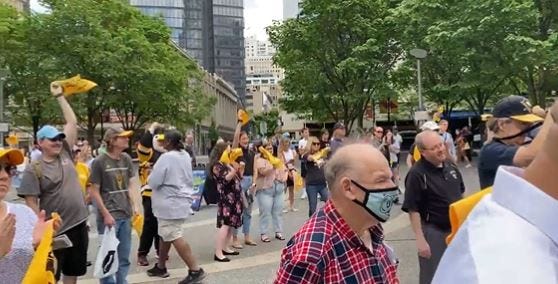 Penguins fans gathered for a rally in Market Square Friday ahead of Game 6 at PPG Paints Arena.

The rally was hosted by the City of Pittsburgh and Allegheny County, where Mayor Ed Gainey, County Executive Rich Fitzgerald and Penguins president Brian Burke all spoke to those in attendance.

"During political season, whether you're a liberal or a conservative, Democrat or a Republican, we all agree on one thing, we want to beat the Rangers," said Fitzgerald four days before Pennsylvania's primary election.

I love this city. 😂 pic.twitter.com/GzRAbAgzSF

The Penguins hold a 3-2 series lead over the New York Rangers, and can end the series with a win Friday.

They'll be forced to do it without their captain, though. Sidney Crosby was ruled out for Friday night's game because of an upper-body injury suffered in Game 5.

The news broke just minutes before Friday's rally. It had some fans on edge.

"I just hope he returns or sleeps well and healthy," said Jordan Alt of Brookline. "It's nervous."

Playoff hockey is important to more than the Penguins and their fans. Bars and restaurants have been hit hard over the last two years. Preparing for a big Friday night rush ahead of a playoff hockey game is good for restaurant managers like Jeremy Lazier from The Yard.

"It's definitely huge, especially for my staff," he said. "They need stuff like this to happen, people being back to work and sports being back in, so that they can make the money they need. Obviously, it helps us as a business grow."

According to the City's 2021 financial report, events and parking revenue are still two areas struggling to get back on track from the pandemic.