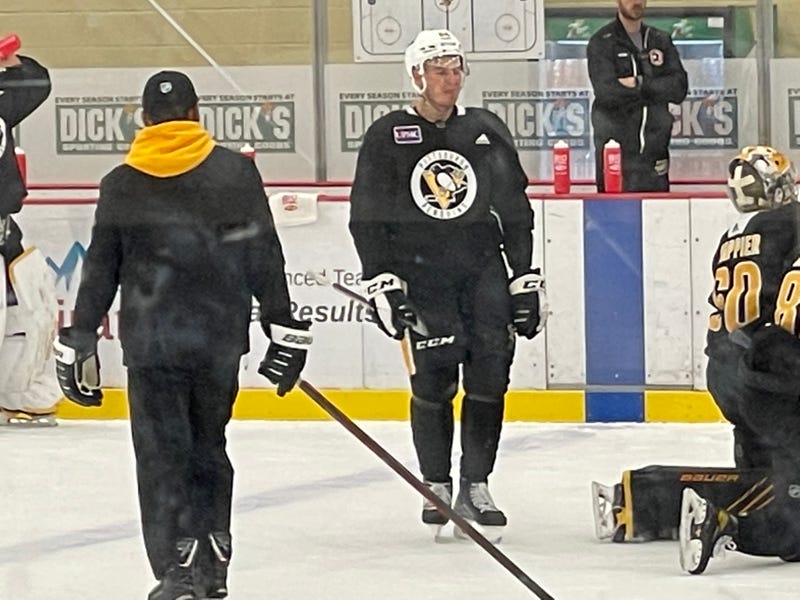 CRANBERRY TWP (93.7 The Fan) – Drafted in the first round with thoughts of being a scorer, forward Sam Poulin has prepared his game to play a fourth-line role if necessary to make this club.

The 21-year-old believes he transformed his game and it started when the Wilkes-Barre/Scranton coaching staff made him a healthy scratch for a game mid-way through the season.  Poulin said it was the first time in his life he was able to play, but not picked.

What it taught him was how important details are and the coaches noticed.

“Even last year halfway through the year he took some big steps,” said Wilkes-Barre/Scranton Assistant Coach Kevin Porter.  “We moved him from wing to center and I think that helped his game a lot.  He’s going to need to learn both, especially if he is going to want to play at Pitt.”

“He’s looked good, another big body, really good below the goal line and in front of the net.”

“I think it’s grown a lot,” Poulin said of his game.  “I learned so much last year.  So much of the small plays count a lot now because everyone is looking for a job.  I think my game is at a much better level.”

After six points in his first 19 games in the AHL with Wilkes-Barre/Scranton last year, including a game where he was a minus-four, Poulin came on.  The 6’2”, 213-pounder finished with 16 goals and 21 assists with not just the attention to detail as a key, but the move to center as Porter mentioned.

Days away from the start of #Pens training camp, the rookies are going at it today ⁦@937theFan⁩ pic.twitter.com/8gRsRQmW0F

Looking at the experience on the Pens roster, his fit would be as a fourth liner.  Not the glamour position, few goals, many bruises, but when you are trying to make the NHL, it’s an opportunity at the next level.

“He has the IQ to be that defensive-minded center,” Porter said.  “He’s good on faceoffs, so we are going to use him at the penalty kill a bit and see how that goes.  For his game to progress, he will have to be a little more defensive-minded.  We don’t want to take away from his offense, but he’s definitely got to dial that in a little bit.”

The 2019 first-round pick says he has some past experiences that can help him dial into what he needs to do.

“During my few tournaments with Hockey Canada at the international level, I was playing more on the third/fourth line,” Poulin said.  “I’ve seen that role before.  It’s nothing new for me.  I’ll be able to fit in.”

It’s not now or never time yet for the lefty-shot, but he feels like he’s made the improvements and adjustments to start the season in the NHL.

“The team saw me play a lot last year,” Poulins said. “For sure there is urgency, because I want to make the team, but I don’t want to put extra pressure on myself.”