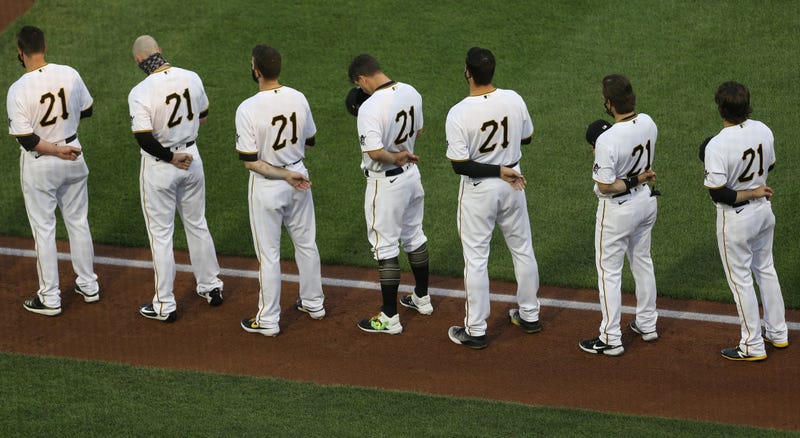 By WILL GRAVES AP Sports Writer

PITTSBURGH (AP) — The Pittsburgh Pirates spent the day honoring Hall of Famer Roberto Clemente. The organization participated in acts of community service. The players all wore Clemente's famous No. 21, the first time a Pirates player donned that number since Clemente's death 48 years ago. There was an extended pregame introduction featuring members of the Clemente family, a nod to a player who was an icon both on and off the field.

Then the first pitch against the Chicago White Sox arrived. The pomp and circumstance faded. So did the nostalgia. Pittsburgh is in the midst of a rebuild. The White Sox believe they're at the end of one. And over the course of nine innings on Wednesday night, Chicago provided a glimpse of what the Pirates hope the finished product might look like.

James McCann went deep twice for the first multi-homer game of his seven-year career as the White Sox rolled to an 8-1 victory.

McCann's fourth home run of the season landed in the grass beyond the center-field wall leading off the third inning. He took JT Brubaker (1-1) deep again in the sixth, a long two-run shot that landed beyond the tarps that cover the first section of bleachers. McCann's teammates whooped as he rounded the bases, the first time in 590 career games he's trotted home twice after knocking it over the fence.

“I’m going to continue to prepare myself to play and whatever games my name’s called, I’m going to be ready to do that,” said McCann, who has been splitting time behind the plate with Yasmani Grandal.

“I was just trying to do my job and get us to the second half of the game and from there let our bullpen and everybody else do everything,” Dunning said. “The first one is out of the way. I got a huge congratulations from the guys and we had a little shower for me.”

Yoan Moncada had two hits for the White Sox, who finished a 10-day road trip 6-3 to help them keep pace in the tightly contested AL Central. Nick Madrigal chipped in a two-run single during a four-run outburst in the fourth against Brubaker that broke things open.

Colin Moran doubled for Pittsburgh's only extra-base hit as the Pirates failed to put together just their second three-game winning streak of the season. A night after putting together an inspired rally to win it in the ninth, Pittsburgh spent most of the night pounding the ball into the ground against Dunning.

“It was a big game for us,” Chicago manager Rick Renteria said. “Obviously we needed to bounce back after yesterday’s (game.) Certainly, Dane set the tone with the way he was able to command the zone and keep them at bay.”

Brubaker has been a pleasant surprise since being elevated to the starting rotation a month ago, putting himself in the mix to be part of the group in 2021. He struggled, however, against the best offense in the American League. The 26-year-old rookie allowed a season-high seven runs in 5 1/3 innings, leaving after giving up a second homer to McCann as his ERA rose from 3.96 to 5.34.

The idea to pay tribute to Clemente, who died in a plane crash on New Year's Eve in 1972 while delivering humanitarian aid to earthquake victims, has been around for years. It gained momentum under first-year manager Derek Shelton, who lobbied Major League Baseball alongside the Clemente family for the right to take No. 21 out of retirement for the day.

“This is a monumental step for our organization being able to honor the Clemente family,” Shelton said. "So yeah, I think we made a really big step forward and it was something very cool to be a part of. Obviously the game didn’t end up the way we wanted but tonight was a monumental night.”

White Sox: The team will skip Dallas Keuchel's next turn in the rotation scheduled for this weekend to give him more time to recover from back soreness. Keuchel (6-2, 2.19 ERA) left his last start against Kansas City due to back discomfort.

Pirates: OF Anthony Alford underwent right elbow surgery on Tuesday, three days after fracturing the elbow crashing into the wall in center field. Alford, signed off waivers from Toronto last month, is expected to be ready in time for 2021 spring training.

Pirates: Steven Brault (0-2, 4.37) makes his eighth start and ninth appearance when the Pirates begin a three-game weekend series in Kansas City on Friday.