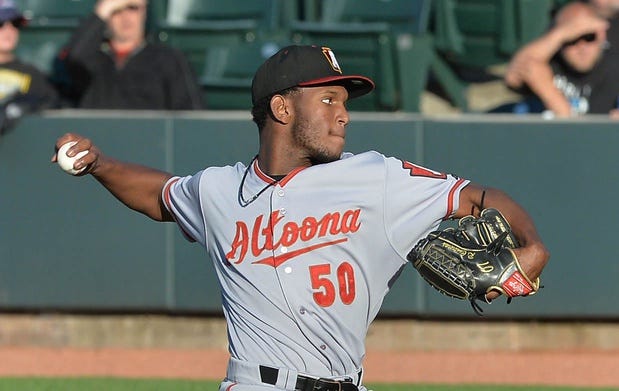 PITTSBURGH (93.7 The Fan) – The Pirates looking at different pitchers continues even into the final week of the season. He looked on a fast track to the majors after a quick start in AA, now after working back from injury righty Roansy Contreras will make his MLB debut against the Cubs tomorrow.

“Our excitement level is we are getting to take a look at one of our prospects,” said Pirates manager Derek Shelton.  “One of our top prospects.  I think we temper all excitement as we do with any situation, but it’s just a credit to our development group as we continue to move guys forward.”

Contreras part of the haul from the Yankees in the Jameson Taillon trade had an amazing start to the season in Altoona.

A right forearm muscle strain wiped out his July and August.  He returned September 1 and made his only start in AAA on September 22.  The Dominican Republic native threw 3.2 innings allowing four hits, a run, a walk and struck out six.

His strength his is fastball which has gained a couple of miles an hour this season to the mid-90s.  Contreras’ manager in Altoona believes it raised through simple growth and gained strength from pitching at 19 and now being 21-years-old.

Acquired from the Red Sox, infielder/outfielder Michael Chavis is with the team after a rehab assignment at AAA.  Chavis suffered a right elbow strain and went on the injured list August 31.  No roster moves announced yet, but the 26-year-old Chavis could be activated soon.  In 22 at bats with the Pirates, the right-hand hitting Chavis batted .364 with a pair of doubles and a home run.  Chavis hit 18 home runs in his rookie year with Boston in 2019.