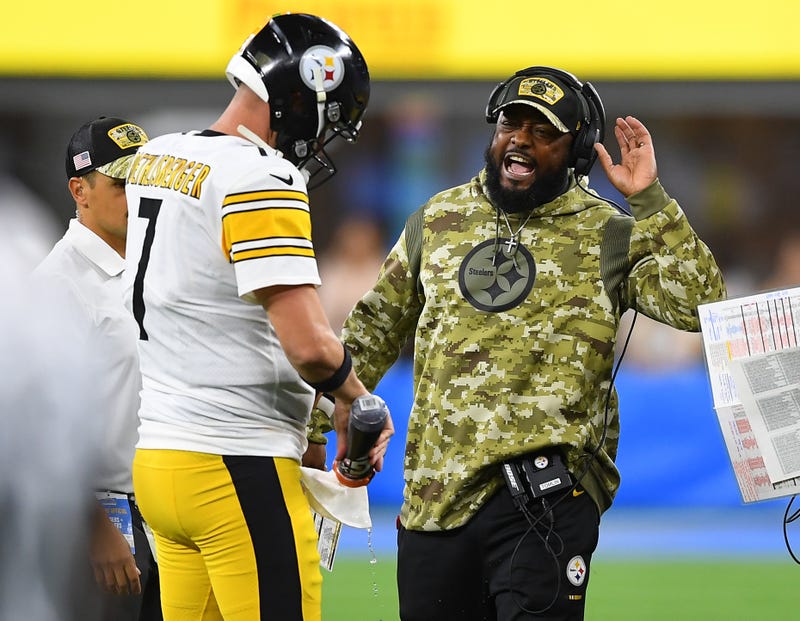 PITTSBURGH (93.7 The Fan) – Disappointed ultimately with the loss, Steelers quarterback Ben Roethlisberger pleased with their ‘no huddle type’ offense against the Chargers. He believes they can now expand the playbook without getting too out of control.

Part of that is because Roethlisberger thinks the offensive line has improved.  Then can handle the play-calling at the line, even with rookies accounting for 40% of that group.

“We were watching film and our offensive line coach mentioned how much better we’ve gotten,” said rookie tackle Dan Moore, Jr.  “I think we’ve taken a tremendous step regardless of what is going on in our room with injuries.  Everybody is coming to work every day and we are just getting better.”

“The line did really good keeping up with Ben and the tempo calls,” said receiver Chase Claypool.  “I think that really helped the receivers get open, it gave Ben a little extra time.”

“We were moving pretty fluidly.  We were calling pretty good plays.  We were excited and we were having fun out there.  I think that was the biggest thing.  I think our confidence level is at an all-time high because we were moving the ball with easy and doing long drives.”

So how about it Matt Canada?  Would he consider more no-huddle offense against the Bengals Sunday?

“Yeah, we had talked about that going into the game as a possibility,” said Canada.  “Obviously you always plan for different scenarios in a game.  Obviously, the score dictated we had to start going faster.  Obviously, Ben has done that a long time, but our younger guys stepped up and understood.  I thought we executed it well.”

Canada was less committal to using the jumbo package again.  He said it was a positive they scored with Zach Banner as an extra tackle and Derek Watt at fullback, but every week is a different week.  The Steelers OC said players’ availability changes every week.  Translation-don’t expect to see that a lot in the future, unless it’s a Tomlin overrule.

Steelers will be without kick returner and slot receiver Ray-Ray McCloud as he was placed on the COVID list.  McCloud targeted 12 times against Detroit and had a pair of catches against the Chargers.

“We will just continue, we’ve got guys up,” Canada said of McCloud being out.  “Whether it’s using Pat (Freiermuth) out there a little bit more.  James (Washington) has done a great job.  Chase is back at full strength.  Diontae has been a very reliable guy.  We will continue to do what we do and Cody (White) has jumped in there at times and played well.  We will move it around like we have been and hopefully score enough points to win.”