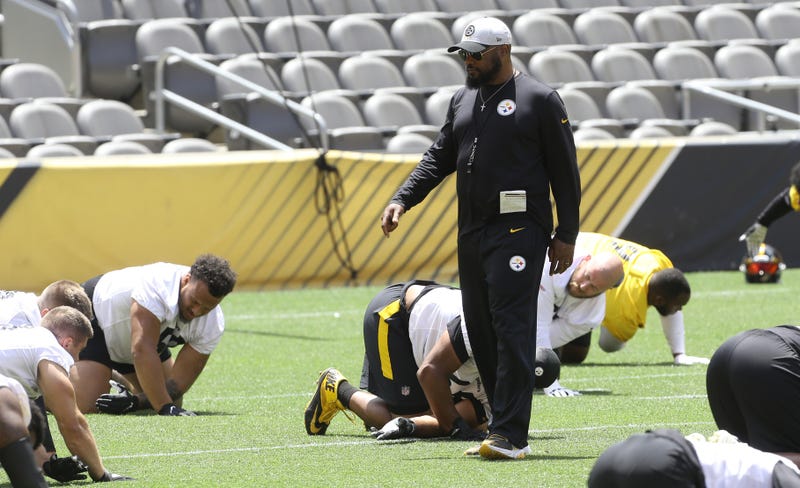 Steelers training camp is officially underway! Of course, you won’t be able to see yourself for a little bit.

Players reported Wednesday with the first workout scheduled for Thursday at the UPMC Rooney practice facility. They will practice there through the weekend before taking Monday off then moving to Heinz Field.

Fans will finally be able to attend next Wednesday but until then you will have to rely on us - the media members who are permitted to watch practices.

Here is where it gets tricky. As you may have heard, since I have (inadvertently) violated a rule a time or two, we are not allowed to pass everything that we see along to you in our reports. So, since I can’t report most of the stuff we see starting Thursday, I am going to take a stab at predicting a few things I won’t be able to tell you.

Ben Roethlisberger is going to look sharp. Forget that photo that created a bit of a Twitter storm this week.

He actually looks fine and he will continue to throw well, just as he had in mini-camp. He will not rebel against taking snaps under center but practicing play-action, whether it be under center or out of the shotgun, may be rough at times.

Dwayne Haskins is going to show off his physical skllls during individual drills but will not impress in 11-on-11 or even 7-on-7 work. Maybe by the fans are there he will look like something other than the fourth-best QB.

Najeh Harris will look very much like a first round draft pick in all phases. His NFL education will begin when they put on the pads and go “live” which may happen as soon as Sunday. That is also when we will finally start to get an idea about the offensive line but it will only be an idea.

JC Hassenauer will get the initial work at center, with BJ Finney as the back-up. It will be up to Kendrick Green to work his way into the competition. His chance, though, may not come until fans can see it first-hand.

FIGHT FIGHT!!!  There will be several dust-ups, since just about every offensive lineman is trying to prove himself one way or another. Couple that with OL Coach Adrian Klemm’s stated goal for his guys to be more aggressive and the stage will be set. This will continue throughout camp so fans will have the chance to see scuffles

With that in mind, DL Isaiah Buggs and Carlos Davis will get to fight someone else other than themselves. Cam Heyward will get irritated with at least one of the offensive linemen but that will just be pushing and shoving.

Diontae Johnson will catch everything and Pat Freiermuth will be an early camp star. But we will be able to tell you about it since those guys will tell us when we ask them.

James Pierre will continue to impress. Not sure if he will have a day when he picks off two Roethlisberger passes as he did in mini-camp but Pierre will inspire confidence. The corners behind him (and Cam Sutton and Joe Haden) will not, however.

Devin Bush will start out slowly as he and the team monitor his recovery from knee surgery.
He will be more active than on Twitter than he will be at practice and that will raise some social media alarm. But neither is an indication of how well Bush will perform this season. It’s what will happen at Heinz Field the second and third weeks of camp that matters and you will be able to see that.

So there you go; some of things we won’t be able to tell you. Although, truth be told, players and coaches will be fairly readily accessible to answer our questions about what we witness at these closed workouts.

The good news for fans is that, unlike last summer, there are a dozen open practices plus a pre-season game at Heinz Field. While it won’t be the same as Saint Vincent College but it will be great to have Steelers fans back in the mix.