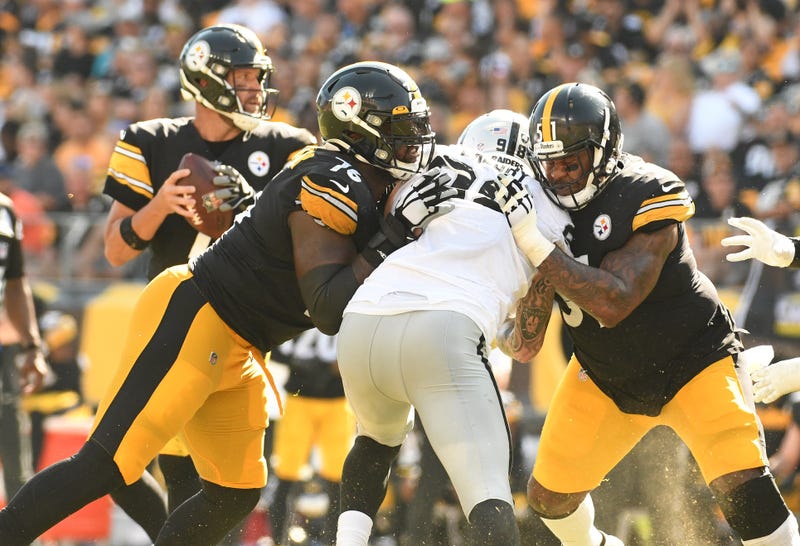 There is an old football adage - The Eye In The Sky Doesn’t Lie – and the Steelers offensive linemen lived it after Sunday’s 26-17 loss to the Raiders. Not that guard Kevin Dotson thought they had played well but watching his quarterback get sacked twice and get hit ten times overall was not pretty.

“It was definitely embarrassing, Dotson admitted after Wednesday’s practice. “It’s like we weren’t noticing during the game then when you watch it and re-watch it’s, like, dang I didn’t pick (my man) up like I was supposed to and stuff like that. We know it’s not going to happen ever again.”

That last sentence is a bold statement, considering that the line had its issues in Buffalo, as well, even though they came home with a win. But you’d expect an inexperienced line to improve at least a little bit and the Vegas game was more like the opposite.

Dotson, though, insists the problems are fixable, especially when it comes to the run game once again ranked last in the NFL.
“It’s always one thing that’s messing us up,” he said. “It could be the O-line missing a block, could be a tight end missing a block, somebody missed a hole, it’s always some, one thing and we get that one thing figured out it’s definitely going to be a great running game.”

At this point, of course, merely adequate would be a huge step up. Mike Tomlin had said earlier in the week that the young group will improve and Dotson sees some signs.” Definitely I can see it out of KG and Dan,” he answered meaning center Kendrick Green and tackle Dan Moore, Jr. “I can see them adapting. They ask a lot of questions and adapt to the environment they’re in so I feel very confident in their ability.”

Dotson doesn’t lack for confidence, himself. “We expect to be great. We can’t have those mistakes. They don’t care if you’re a rookie anymore, they don’t care if you’ve started 16 or 20 games, and they expect us to provide a chance. We weren’t really banking on there being hard times; we’re just trying to get it all together.”

While it is still early in the season and all four AFC North teams are 1-and-1, the Steelers can’t afford losing to Cincinnati at home. The embattled offensive line may be the proverbial “work in progress,” but that work had better start to show this week.

“We’ve been doubted since before the season started,” Dotson chuckled, “so there’s not too much more pressure than there was already.”