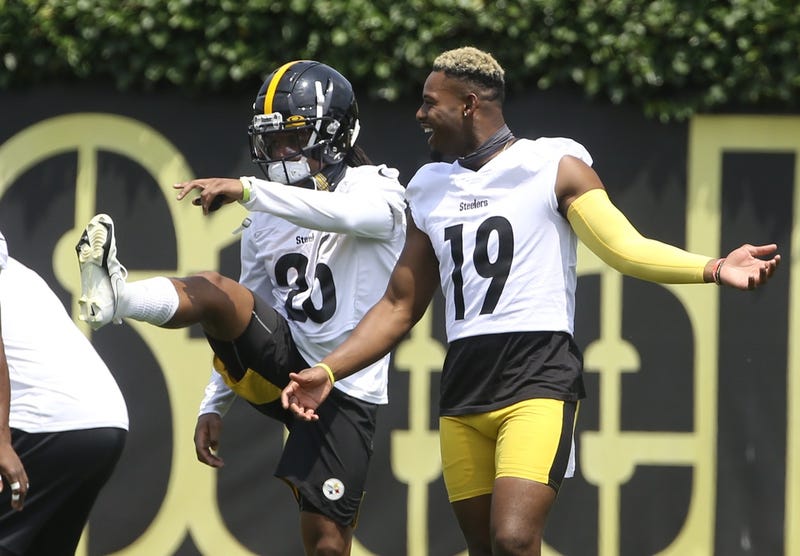 The Steelers had their first practice in front of fans since 2019 on Wednesday, and even though it wasn’t at Saint Vincent College in Latrobe, it was still exciting for the 6,000 so who were there.

Fans cheered when rookie Najee Harris broke through for a nice run and other things happened that of course are being discussed on social media.

After scoring a touchdown, Smith Schuster did his familiar danced that angered so many people last year.

Many people in the crowd went nuts when he started dancing so don't expect that to be going anywhere.

He did stop dancing on opponent's 50-yard-line logos last season after a reported talk with Coach Mike Tomlin.

2. Najee appears to be fully vaccinated.

Several people pointed out that Harris was not seen wearing that NFL-mandated yellow bracelet that highlights what players in the league remain unvaccinated from COVID-19.

Players reportedly not allowed to remove the wristband until they are fully vaccinated.

ESPN’s Brooke Pryor reports that over 90 percent of the Steelers players have been fully vaccinated with some saying that number is close to 100 percent.

Having a team fully vaccinated has been described as a competitive advantage with the possibility of a team having to forfeit a game if a game is unable to be rescheduled due to a COVID outbreak.

Steelers have over 90% of their roster vaccinated, and wristbands must be worn until a player is FULLY vaccinated.

Pryor also says she is seeing a lot of Harris #22 jerseys among the fans inside the Heinz Field on Wednesday.