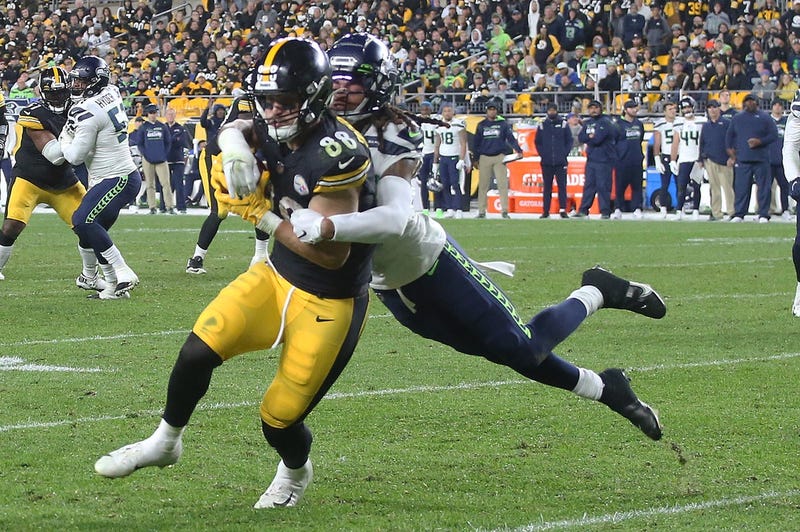 PITTSBURGH (93.7 The Fan) – We are finally starting to see the tight end many of us saw in training camp. Pat Freiermuth headed into the open week after seven receptions for 58 yards, both career highs against Seattle.

While some of that is Freiermuth saying he has a better understanding of the offense and defense and what he’s being asked to do.  A portion of that is filling the void left by JuJu Smith-Schuster.

“I’m just going to do what the coaches and the offense has fit for me to do,” Freiermuth said.  “If that’s get more receptions or get more targets.  Blocking more, I will do that.  Obviously, I see this as an opportunity.  I definitely miss JuJu out there.”

Like Najee Harris does, Freiermuth often has conversations with quarterback Ben Roethlisberger.

“We are building that relationship,” Freiermuth said.  “It’s an everyday thing.  Obviously, he’s had us over at his house a couple of times to get used to us.  It’s been awesome.”

“Pat got involved and continued to make the improvements we think he can make,” said Steelers Offensive Coordinator Matt Canada.  “He and Ben continue to develop a rapport, which we know is important.”

“How to prepare,” Freiermuth said of what he’s learned from Roethlisberger.  “He probably watches the most film on the team.  Trying to feel how the defense does things to stop our offense.  Understanding the preparedness to go into a game and be successful.”

Maybe the most important stat in his working relationship with his quarterback, of the 20 passes thrown his way, the rookie caught 17 of them.