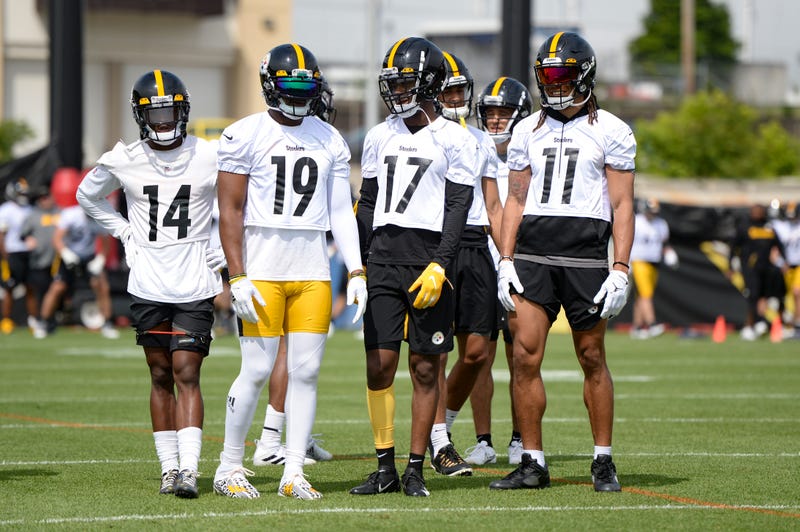 PITTSBURGH (93.7 The Fan) – When asked directly on Wednesday what his biggest goal is for this season, Steelers receiver JuJu Smith-Schuster had a quick answer.

“Playing more outside, simple as that,” Smith-Schuster said.

Reading between the lines, it may have to do with Smith-Schuster wanting to get more yards per catch heading into what he hopes is a fruitful season before free agency.  JuJu did not hide his desire to get a big contract after this year and the 8.6 yards per catch in 2020 doesn’t help his cause.

“Adding more to your craft,” Smith-Schuster said of the desire to play outside.  “You look at year two, probably the best year I had as a Pittsburgh Steeler.  I played more outside than inside.”

He’s right about that, catching 111 passes with 166 targets for 1,426 yards and 7 touchdowns.  Of course he had Antonio Brown on the other side of him.  He believes he can be that for Chase Claypool or Diontae Johnson or James Washington.

“Having another threat player on the other side,” Smith-Schuster said.  “With Ben, I think we have players all around.  We have so many weapons you don’t know where Ben is going to go.”

Smith-Schuster is now Roethlisberger’s Heath Miller, he’s the guy Ben looks to for a key third down conversion.  Also when he’s in trouble, Ben looks to JuJu.

In the entire NFL, only Keenan Allen had more catches last season that resulted in first downs than JuJu Smith-Schuster.  The Steelers don’t want to lose that value in the middle, however JuJu believes he can do that from anywhere.

“I’m for sure the security blanket wherever I’m at on the field,” Smith-Schuster said.  “As far as third down plays and all that.  I still don’t mind playing inside and outside.  In our formation, we move around.  Whether I’m ‘F’, ‘X’, we move around at positions.  You can’t really tell if I’m the number three receiver in the slot.  It all varies.”

The 24-year-old receiver admits he has not talked to new offensive coordinator Matt Canada about more reps outside.  JuJu says there are a few plays already early in OTAs for him not inside.

When he plays outside, JuJu says little used Ray-Ray McCloud is a good fit in the slot.  Steelers are the third team in three years for the 5’9”, 190-pound McCloud.  The Clemson product started two games last season finishing with career-highs 29 catches for 298 yards.

The other question when/if JuJu gets snaps outside, who sits?  Or a selfish question, who gets fewer receptions and how do they react?

JuJu is dining one more year in Pittsburgh.  A storyline for camp is where?