KANSAS CITY (93.7 The Fan) – Expectations are always high in Pittsburgh. The Steelers expect to win a championship every year. Did you really believe they would this season?

Even from the start with the hype around the Browns, before all of the Ravens injuries, knowing the Chiefs, Bills and Titans were good.  Add in the toughest schedule in the NFL, even the most enthusiastic fans thought the Steelers might win 10 games.

Yet here they are.  In the post-season and understandably huge underdogs against the Chiefs.

I’m not telling you how to root on Sunday, but there was ever a playoff game in the last 15 years where you could sit back with little expectations and just enjoy.  This is it.

I talked to numerous Steelers fans Sunday at Arrowhead Stadium who made the trip to Kansas City, all said they never have felt less pressure for a game and just ready to enjoy it.  Whatever the outcome.  Obviously, they are rooting for the Steelers, but it’s pure underdog fun. 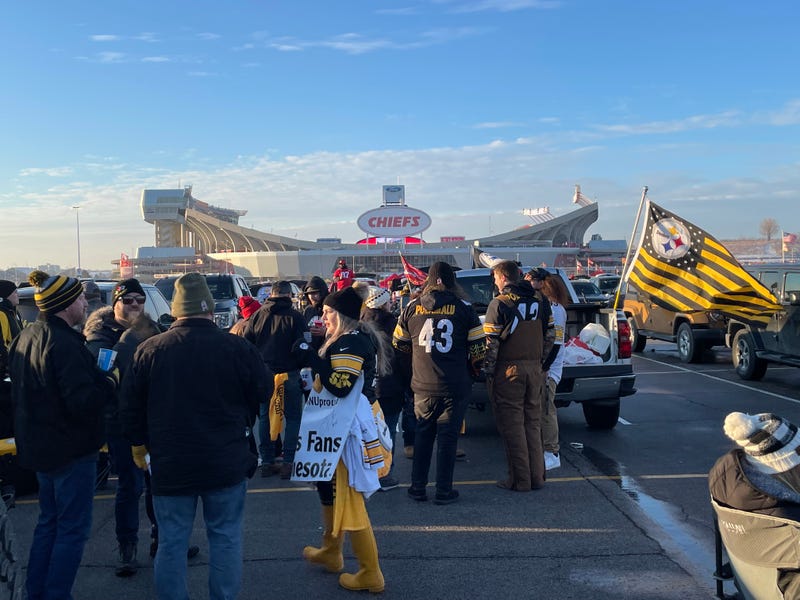 Mike Tomlin called them ‘warts’ after the win over Baltimore. Here are just a few of them the Steelers overcame to get into the playoffs.
·     One Ben Roethlisberger led touchdown drive in first half since the Bears game.
·     Stephon Tuitt and Tyson Alualu played 57 snaps total for the season, all by Alualu and he was gone early in 2nd game
·     Running backs not named Najee Harris combined for 137 yards on 51 carries with no scores (2.6 average)
·     Your most experienced receiver played 4 games, JuJu Smith-Schuster injured his shoulder against Broncos and was lost for the year
·     A corner, Ahkello Witherspoon, who played 8 games, led team in INT with 3
·     It was going to be the breakout year for 10th overall draft pick Devin Bush, the linebacker finished 6th in tackles, missed a game due to injury and a couple due to COVID—had the play-calling duties stripped
·     Veteran corner Joe Haden missed over a month due to a foot injury
·     Kevin Dotson, arguably your best starting offensive lineman, suffered high-ankle sprain v Detroit and hasn’t returned
·     TE Eric Ebron made 3 starts with 12 receptions for $6 million

All of this yet here the Steelers are in the postseason.

The preseason champion Browns are scattered across the country seemingly now with more questions than answers.  The Dolphins were a team on the rise, they fired their coach.  The Chargers were another team to watch out for, they, and their Pro Bowl young QB, didn’t make it.  The New York football teams combined for 8 wins.

Tomlin is right, the Steelers have their warts, but like Roethlisberger said Wednesday, no one expects them to do anything they are just going to do out and play and enjoy it.

There will be plenty of time in the future to dissect player personnel, coaching decisions, play calling and individual efforts.  I hope you can just enjoy this bonus postseason.