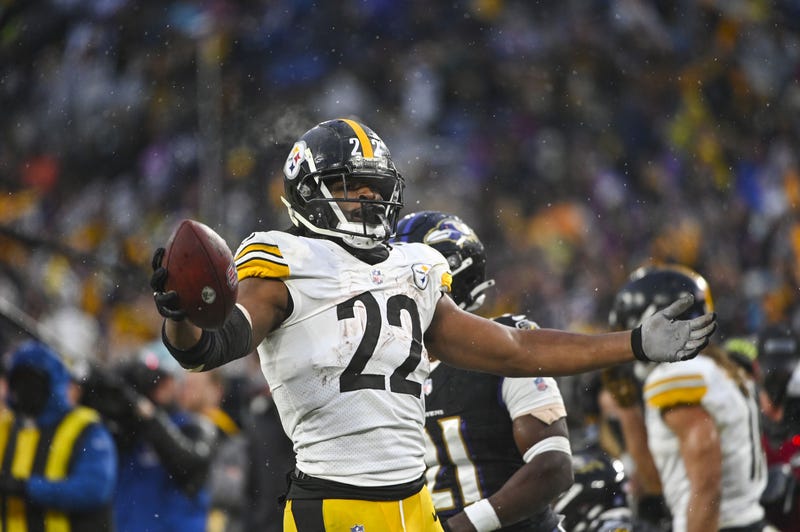 PITTSBURGH (93.7 the Fan) Prior to the 2021 NFL Draft, a lot of discussion was being made about who the Pittsburgh Steelers should take with their first round pick.

Some wanted a skilled guard to bolster a weak offensive line, others had their eye on a running back from Alabama.

The Steelers went with the latter and so far, so good.

After playing all 17 games of his rookie year, the NFL has named Najee Harris a finalist for the 2021 Pepsi Zero Sugar NFL Rookie of the Year.

Harris had an outstanding rookie season and is well deserving of a nomination; Some of his numbers and status with the team can reflect that.

The running back was picked as the Steelers’ rookie of the year and rushed for 1,200 yards, breaking a franchise rookie rushing record.

In total Harris reached 1,667 yards from scrimmage, leading all rookies and fourth in the league in that stat.

On the season, Harris averaged 70.6 yards per game on an average 18 carries.

One of the most heavily used running backs across the league, Harris impressed and gave the Steelers an offensive boost all year.

Harris started all 17 games and didn’t record a single fumble.

Fans will be able to vote Harris for the award on Twitter and voting is open until Jan. 31.

Harris is up for the award along with wide receivers Ja’Marr Chase and Jaylen Waddle, tight end Kyle Pitts, linebacker Micah Parsons, and quarterback Mac Jones.

If Harris wins, he will be the fifth Steeler to do so on the offensive side of the ball and the first since Ben Roethlisberger won in 2004.