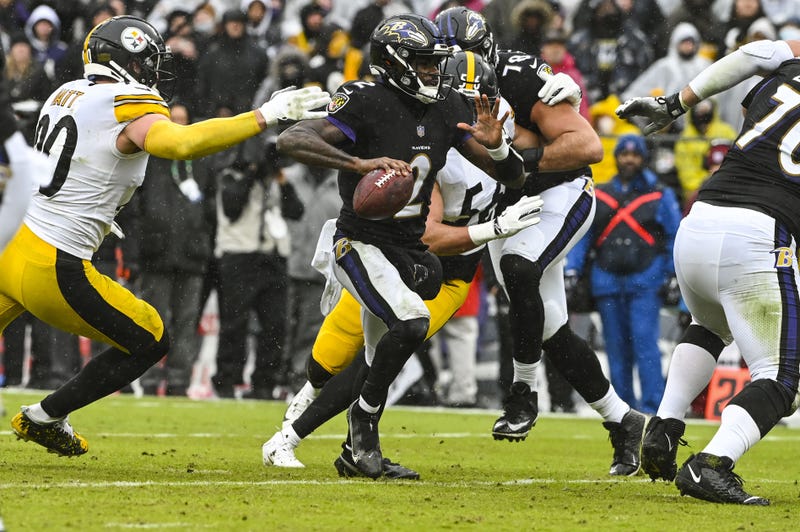 PITTSBURGH (93.7 The Fan) – When it comes to playing Baltimore, recent results show you would rather face Lamar Jackson. It doesn’t appear as if he will play as Ravens Head Coach John Harbaugh says he is week-to-week after leaving Sunday’s win against Denver with a knee injury.

Jackson has won only one of three starts against the Steelers and that win back in overtime in 2019 when Ben Roethlisberger was out. The 25-year-old is 1-2 with four touchdowns and six interceptions in those matchups. He’s rushed for 217 yards but no touchdowns and sacked 16 times.

Overall the Steelers have won four straight in the series with losses to Jackson, Robert Griffin the third and Joe Flacco as the starting quarterbacks since 2017.

They say they are approaching this week with the potential to either face Jackson, who hasn’t been ruled out, but again unlikely, or Tyler Huntley.

“Tyler Huntley is a good guy as well,” said Steelers linebacker Alex Highsmith. “He kind of runs the same offense that they do. They are both very dangerous running the ball as well. We just have to get after both of them, whoever plays.”

“We saw him last year at the end of the year when Lamar was hurt,” Steelers defensive lineman Chris Wormley said of Huntley. “It’s really hard to replace a guy like Lamar.”

“I know Huntley has been in the system for a couple of years now. He can do some similar things, but I think Lamar is in a class of his own. When it comes to what he can do with the ball, with his legs, throwing the ball. His command of the offense.”

“A guy like Huntley, he’s been there a couple of years. He can still do some things, but I think it will be hard to replace a guy like Lamar IF he’s not healthy.”

Huntley led the Ravens back against the Broncos after the early injury to Jackson. The third-year pro threw for 187 yards with an interception and ran for 41 yards including the game-winning touchdown with 28 seconds left. Huntley led a 16-play, 91-yard drive to basically end the game.

He’s just 24-years-old and has made four starts for Baltimore throwing for 1,283 yards with three touchdowns and five interceptions in his career. Huntley has been sacked 20 times, but run for 358 yards and three TDs. In a start against the Steelers last year, he went 16 of 31 for 141 yards with a pair of interceptions, 72 yards rushing and sacked three times in an overtime Baltimore loss.

“He has a very unique talent as well when it comes to running and passing,” Highsmith said. “We just have to be locked in on him as well. They have so many weapons on offense. We have to lock in and be on our ‘p’s’ and ‘q’s’ and just really have a good game plan against these guys.”

Both players said the recent trend of the Steelers offense controlling time of possession would be huge again in this game. The last time they didn’t own the edge in possession time was against Tampa Bay and that was by two seconds.

“That’s what we like to see, they’ve found a way to be efficient running the ball,” Wormley said. “Najee and those guys have really picked it up the last month. Kenny has been great handling the ball as far as turnovers.”

“They’ve done a great job possessing the ball,” Highsmith said. “The way they were moving the ball, running the ball was awesome. It allows us to perform at a high level. I love seeing the way they moved the ball the last couple of weeks and see they are going to continue to do that.”