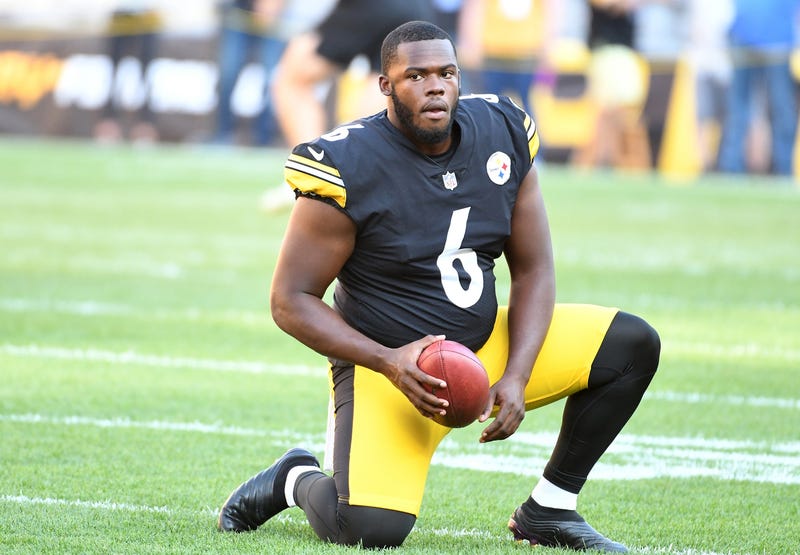 PITTSBURGH (93.7 The Fan) – We’re all guilty of it, focusing on stats and judging a football player’s worth only by how they perform, sometimes only for brief moment. We don’t often think about the reasons they didn’t perform. We say they are excuses, they’re being paid, handsomely. Go out and do your job.

It’s even is that way with punters.  Not the most glamourous position on a team, but expectations are high, especially when you use a draft choice on one.  When there is a bad kick or bad game, you’re hurting the team.

Rookie Pressley Harvin experienced all of that in what he called a grind of a rookie season.  What we didn’t know was that his father and grandmother were sick during it.

You can imagine, you are hundreds of miles from home, at your first job, struggling at times while millions watch it happen.  There is the scrutiny from the outside and not wanting to let your teammates down on the inside.

It’s now late in an up-and-down year, you’re preparing to leave that day for a game in what will be a crucial finish for yourself and the team.  Then Harvin get that call. His dad passed away.

“When I first found out the news about my father, it was Christmas morning,” Harvin said.  “I was supposed to be traveling to Kansas City, but decided to go home.  In that car ride back, because flights were getting cancelled left and right so I had to take a 10-hour drive back home.  On that drive back, I took a second to reflect on what my dad told me.”

“The biggest thing he told me was whenever the time goes that he wasn’t going to be here anymore was to handle my business and take care of my family.”

“My life is different now.  I have this job that is the NFL, but at the same time you still have to handle your business outside of it.  It showed me that you almost have to live two lives.”

While he was handling family business, his replacement, Corliss Waitman was excelling.  In the first game against the Chiefs, Waitman averaged 60.5 yards in two kicks and followed that up with five punts for a 48.8 average.

Harvin is now grieving his father while his replacement is making a case to replace him permanently.  The two had become friends during training camp in part because they are a rarity in the league, being African-American punters.

“I was a little bit worried about continuing to have a hat and continuing on the team,” Harvin said.  “As an African-American punter, sometimes you have to put yourself aside to let someone else shine.  If anyone was coming in for me, I wanted them to do well for the team.”

Harvin said it actually brought a smile to his face that it was Waitman having the success.  Even with those two exceptional games, Mike Tomlin stuck with their seventh-round pick.  They continued to believe in him.

As Harvin worked his way back during practice getting ready for the last regular season game, more devastating news for he and his family.  The night before the Baltimore game, his grandmother passed away.  Exactly two weeks after his father.

This time Harvin said he was determined to fight through this adversity and be there for his team.

“It’s ok to not be ok,” Harvin said he’s learned.  “These last couple of weeks have been tough.”

The Ravens game was, understandably, tough.  He punted eight times and averaged 37.2 yards a kick.  There was talk about the playoff game and going back to Waitman.  Steelers again stuck with Harvin and he rewarded them with his best day as a pro-seven punts for a 49.7 average.

“Told myself to go out there and have fun, it was one of the most fun games of my life.  Unfortunately, we lost, but for me individually, I had more fun than any game.”

It was important for him to leave the season on a good note, like he left it with his family.

Before he lost his father and grandmother, both were able to watch their son/grandson play in the NFL in person December 19 against Tennessee.

“We were able to get them up for the game,” Harvin said.  “I will never forget that moment of all of us being in the house as a family for just that last time.  It makes me smile.  I didn’t want them to worry about anything on my side of things, I was more worried about them.”

He said it brought his family ‘true pleasure and joy’ to be at that game and thanked Steelers Director of Player Development Darrel Young for making sure his family was treated right.  He also thanked team chaplain Kent Chevalier, who Harvin said he’s had many conversations with over the last few weeks and months.

He believes the example starts at the top.

“When I first got up here, I was told the model of the Rooney family was family, faith and football in that order,” Harvin said.  “You kind of hear all over the place, we always say we are together, we are family.  I really, really felt that whenever we got the bad news about my dad and my grandma.  It was always family first.”

“This organization is always family to me.  I know it was for them as well.  We kept our faith.  I was extremely blessed and appreciative what this family and organization gave to me.”