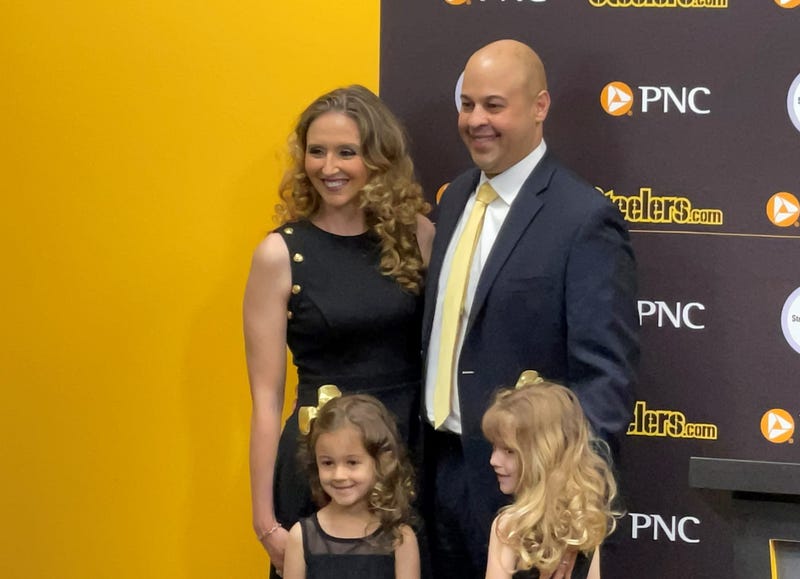 PITTSBURGH (93.7 The Fan) – Growing up in New Orleans, Omar Khan worshipped the Saints. He knew their roster up and down, but it was a conversation he had with his dad that first introduced him to the Steelers.

“I grew up a diehard Saints fan when I used to talk about Rickey Jackson, Pat Swilling, Sam Mills, Vaughan Johnson; he would tell me, let me teach you about this guy named Jack Ham, Jack Lambert,” Khan said as he was introduced as the new Steelers GM on Friday.  “He would tell me about a guy named Joe Greene, Franco Harris, Lynn Swann.  It’s kind of ironic that, fast forward, I ended up in Pittsburgh.”

Even with the introduction to some of the Steelers greats by his father.  There was nothing on the radar that he would ever come and work in Pittsburgh.  In college at Tulane, Khan worked with the football team as an undergraduate assistant.  He got a player personnel internship with the Saints in 1997, that grew into a job as a Player Personnel Assistant.  It’s where he started to hone his forte of negotiating contracts, but he also had a hand in football administration and pro scouting.

“I was working for the Saints and born and raised in New Orleans and I never thought I would be leaving New Orleans,” Khan explained.  “One day I got a call from the Steelers for a position.  Obviously, the opportunity to work for the Rooney’s, I wasn’t going to pass it up.  I just felt at home from the very beginning.”

Kevin Colbert hired him a year after he took over from Tom Donahoe in 2001 as a football operations coordinator.  He also advanced from that position to be the director of football administration a decade later and then in 2016 promoted to vice president of football and business administration.

All of this for a Louisiana native growing up the son of immigrants.  His mother came to the United States from Honduras as a young adult, while his father was a young adult moving from India.  Omar says football was the bond he had with his father, that he taught him everything he knew about the game.  It obviously created a passion that carried him to this position.

Asked about being a minority hire during his news conference on Friday.

“I’m hope we get to the point where we are not even needing to have those conversations,” Khan said.  “I’m excited about what the league is doing, the initiatives, the Commissioner and Art (Rooney).  There are some great things they are doing and I think it’s headed in the right direction.”

Khan said it will be an easy transition given what he’s learned from Colbert and his relationship with head coach Mike Tomlin.  He said he’s only had the job for a couple of days, saying his dad has been looking forward to this moment for a long time.  But it still hasn’t hit him that he’s the Steelers general manager.