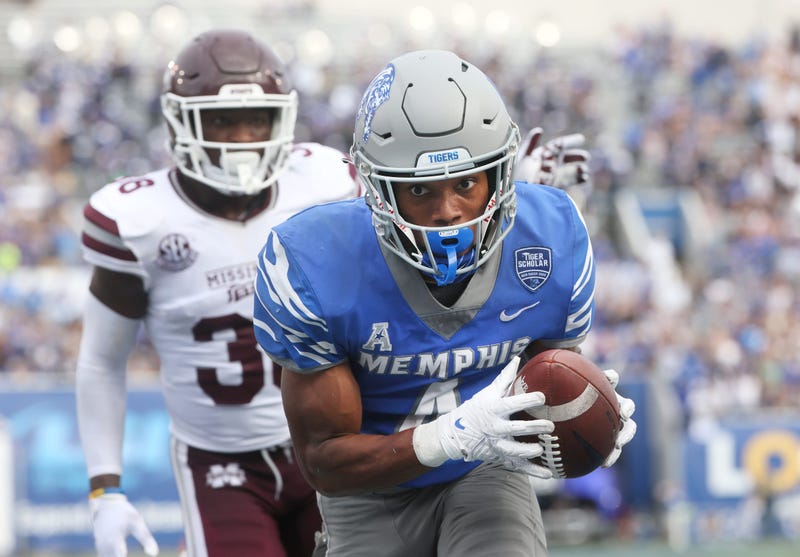 PITTSBURGH (93.7 The Fan) – A NFL talent evaluator for nearly four decades, Pro Football Network’s Tony Pauline told the PM Team the Steelers got a Tyreek Hill player in the fourth round.

“I thought he could have gone in day two to the Kansas City Chiefs,” Pauline told 93.7 The Fan about receiver Calvin Austin.  “I thought he would have been an outstanding replacement to Tyreek Hill, if there is such a thing.  Yeah, he’s only 5’ 7.5” but he plays big football.”

The Memphis First-Team All-AAC receiver and returner is listed at 5’9”, 162-pounds and a semifinalist for the Burlsworth Trophy to the best player in college football who started as a walk-on.  Austin led the Tigers with 74 receptions for 1,149 yards and eight touchdowns in 2021.  He is a former Division One track All-American who ran a 4.32 second 40-yard dash at the NFL Combine.

“He’s explosive,” Pauline said.  “He’s a terrific downfield receiver.  He’s an outstanding route runner.  If anyone was at the Senior Bowl practice in the pouring rain.  He was the only one able to run short, crisp routes and separate from defenders and stay on his feel.  He caught everything.”

“He can be a return specialist, he can run reverses.  You can line him up in the slot, you can move him around the field.”

Steelers hold a three-day rookie mini-camp starting on Friday.  Here is what Pauline said of other draft picks.

Pauline believes the Steelers played a little poker on Pickett.  Already knowing all they needed on the Pitt QB, he heard the Steelers were not trying to show too much attention before the draft.

“I’m not really huge on Pickett,” Pauline said.  “He’s not a Ben Roethlisberger-type, he’s a very good game manager.  He’s the type of quarterback where you are going to have a strong running game around him because I don’t think he’s the type of guy that’s going to carry the offense on his shoulders.”

“He’s got a lot of upside,” Pauline told Andrew Fillipponi and Chris Mueller on 93.7 The Fan.  “He’s a long receiver.  He’s a good vertical receiver, good athlete.   He catches the ball well, plays with excellent body control but he has a very shallow body of work.”

“He’s a guy that’s going to need a bit of development before he’s NFL ready.  We’ve seen the Steelers do a good job at developing receivers.  There is no reason to believe they won’t be able to do it with Pickens.”

“He fits well in a 3-4 defense when they put the linebacker up over tackle,” Pauline told The PM Team.  “I don’t think he will be a good two-gap end.  He’s more of a three-technique.  He’s very quick and plays with great pad level.  Not a lot of strength in his game, so he is going to struggle holding the point, but he is a young guy.  As he matures, he should improve.”

“I know people are projecting him as a tight end,” Pauline said on 93.7 The Fan.  “It will be interesting to see how the Steelers use him.  I see him as the pass-catching version of James Conner, a real good West Coast fullback.  The bloodlines are interesting, but besides that he’s a real good football player.”

“It’s an interesting pick,” Pauline said.  “He’s got a good arm.  He’s very athletic.  He’s a mobile passer that can make plays in and around the pocket, make plays with his arm and his feet.  He’s a developmental guy.  I don’t know he will make the active roster, but I’m sure he will make a practice squad somewhere in the league.”

Check back to 93.7thefan.com for coverage this weekend from the Steelers rookies first days in black and gold.