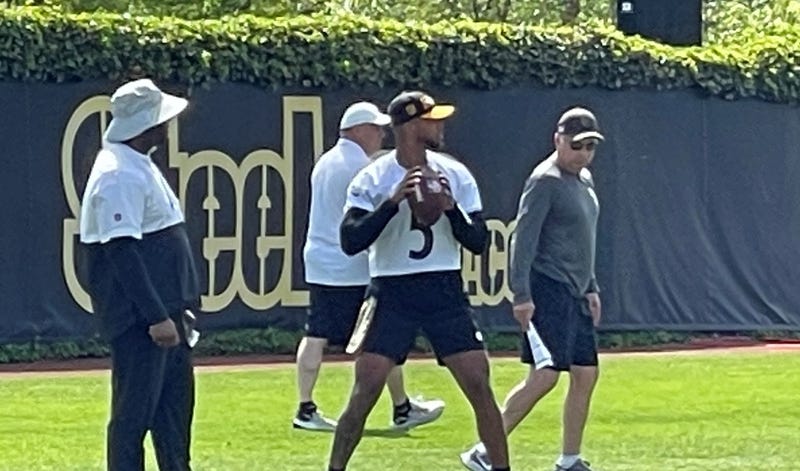 PITTSBURGH (93.7 The Fan) – The Steelers have only a finite number of players than can bring to town for official pre-draft visits. They were serious enough about quarterback Chris Oladokun, he was one of them.

So, after drafting Kenny Pickett in the first round, the selection of the 6’2”, 195-pound Oladokun in the seventh was not just a dart against the wall for a fourth arm in training camp.  They think more of him than that, potentially if he were to impress, he could put Mason Rudolph’s future in jeopardy.

Oladokun has spanned the United States looking for the right opportunity starting at South Florida, then Samford and finally at South Dakota State.  The latest move he admitted was a culture shock, but met some of the friendliest people.  He’s also learned the gamut of college offenses having never had the same offensive coordinator in consecutive seasons.

“I went from USF which is a read-option offense to Samford which is air-raid,” Oladokun said.  “Those are completely different.  Went to South Dakota State, that is more of a pro-style offense with huddling and longer verbiage.  That definitely got me prepared for this opportunity.”

This past season he completed 62% of his passes for 3,164 yards with 25 touchdowns to seven interceptions.  He rushed for another 166 yards and pair of touchdowns.  He had three of his better games against three of his toughest opponents in 2021—throwing for two and rushing for another touchdown in a 19-point win at FBS Colorado State.  He threw for 315 yards and a touchdown in a loss at Montana State in the FCS semi-finals and also was the only quarterback to beat national champion North Dakota State.

Getting drafted is cool, even if it’s the seventh round, but he knows what is in front of him.

“Whatever my role is, I’m going to embrace it,” Oladokun said. “Obviously, they drafted Kenny in the first round and there is Mitch and Mason.  My job is to come out and compete every single day as if I’m going to be the starter.  At the same time, embrace my role and help those guys who are in front of me to grow and improve on Sundays.”

“Ultimately, we want to win.  If my role is being Lamar Jackson when we are playing the Ravens.  If my role is holding a clipboard on Sundays, that will be my role and I will do the best at my role.”

The Tampa native said it’s been great so far with the Steelers, the coaches have challenged them.  He’s also learned a lot in the short time together saying he had a good meeting with Steelers Offensive Coordinator Matt Canada leading up to the draft.  He is also getting to know the first-round rookie QB.

“It’s been great to get out here and work with Kenny (Pickett),” Oladokun said.  “He’s been great.  We are able to get off the field and in the meeting room, study together and go over the installs.  To have another rookie with you, going through the same thing you are, is invaluable.  He’s been really good, built up a relationship.”

It’s not just getting to know Pickett.  He has been intentional in trying to learn his new teammates.  Now it’s getting acquainted with the guys who have been around the block.

“I think the most important thing is getting to know those guys off the field,” Oladokun said.  “Sitting down and having lunch with them, joking around in the locker room and getting to know their personalities, where they come from, their backgrounds.  I think that’s really important.”

Once he gets to know them, he’ll try to earn their trust and respect.

“I don’t think you are on this field unless you belong,” Oladokun said.  “That’s something I have been telling myself ‘I do belong in the NFL’.  I feel comfortable out here with all of the guys.  I’m just really excited to keep learning and growing as a complete player.”