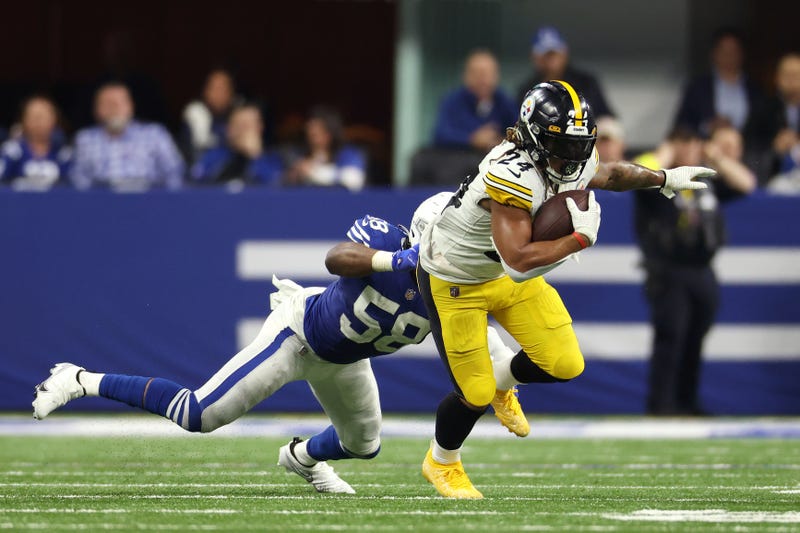 PITTSBURGH (93.7 The Fan) – Meeting with reporters for the second time in 13 hours following the win at Indianapolis, Mike Tomlin said something caught his eye while watching game-tape Tuesday morning.

The Steelers Head Coach saying the win yesterday wasn’t just about the starters making plays, but some who have been waiting all year for a shot. They came through when called upon.

“People rising up and making significant plays for us,” Tomlin said. “I think that has to happen at this point in the journey that is the season. Due to attrition or people evolving, I just think people get an opportunity to put their hand in the pile and be reasons why we are successful.”

Tomlin singled out a few:

K Matthew Wright-‘banging field goals’. The kicker, filling in for Chris Boswell who remains on injured reserve, missed a couple of field goals in his first game with the Steelers this year (against New Orleans). Tomlin said they were moving forward with him despite the errant kicks and he is six-for-six since. That includes a 45 and 52-yarder Monday night and a 42-yarder at Acrisure Stadium.

CB James Pierre-‘had a significant interception that kind of jump started us and put us on a short field.’ Pierre did not play any defensive snaps the last two games, he played 47% Monday after a couple of starts earlier in the season.

‘The collection of running backs’ Benny Snell and Anthony McFarland-‘guys that had elevated roles and really delivered for us in a really positive way.’

There was a time Snell started games for the Steelers. He had a 113-yard game in the 2020 season opener, but had ZERO carries this year until the Colts game. Getting a chance because of the injury to Jaylen Warren and then the lead tailback after Najee Harris’ injury, Snell rushed 12 times for 62 yards and the game-winning touchdown. It’s also the final year of Snell’s rookie contract, so a big opportunity for him.

High hopes for McFarland as a fourth-round pick in 2020 after watching him put 298 yards on Ohio State while at Maryland. Injuries played a huge part in playing only 13 games in his first two seasons. Having Najee Harris and the emergence of Jaylen Warren kept him on the practice squad all season until a few days ago. McFarland had six carries for 30 yards and caught two passes for 11 yards converting a big third down as well.

WR Cody White-‘was a contributor at receiver and special teams as well’. It was White’s birthday on Monday, turning 24-years-old, he came off the practice squad with a catch and played nine snaps on special teams. High hopes coming out early from Michigan State, White went undrafted and played in 15 games for the Steelers last season. The drafting of George Pickens, performances of Steven Sims and Myles Boykin on special teams had pushed him off the active roster. White’s opportunity against Atlanta, like the afore mentioned players, now depending of starters’ health.

“It doesn’t happen solely in the stadium,” Tomlin said. “This is not a patient man’s business. We never ask them to be patient, we ask them to work while they wait for the opportunity. Their work shows when they get the opportunity. I thought that was reflective of all of those guys. We will always have an inclusive mentality.”

“I’m thankful for that group’s collective readiness and the playmaking that added to our cause in a big way.”