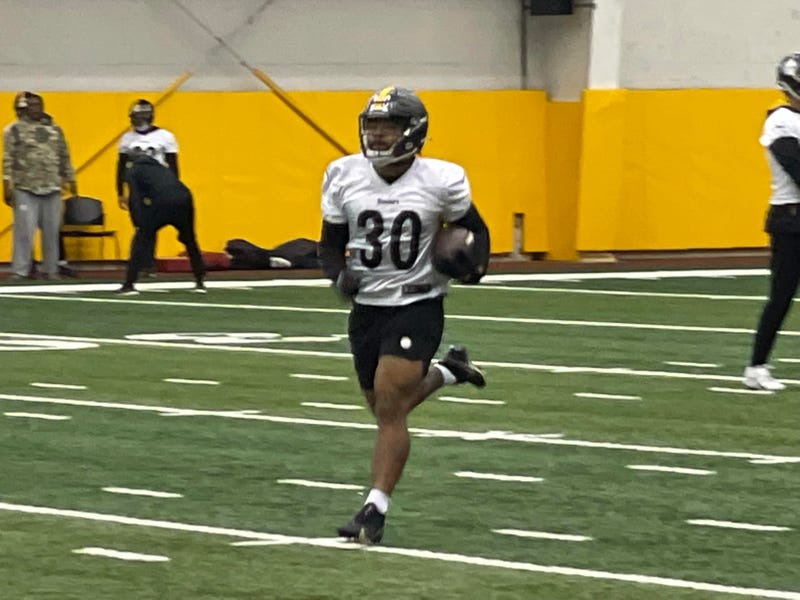 PITTSBURGH (93.7 The Fan) – After missing last week with a hamstring injury, Steelers rookie running back Jaylen Warren says he feels good, the doctors cleared him and he’s ready to play in Atlanta Sunday.

Warren watched as Benny Snell and Anthony McFarland each made impacts in the win over Indianapolis. Warren said he wasn’t envious or frustrated about not being in there as much as he was happy those two got an opportunity.

“I got a lot of joy from seeing them eat,” Warren said. “It’s a great thing to see us collectively producing. When one eats, we all eat. It was cool to see the guys take advantage of their opportunities.”

The 5’8” undrafted rookie has rushed for 190 yards this season on 38 carries (5.0 average). Before the injury he had his two most productive games rushing six times for 50 yards against the Eagles and nine times for 37 yards against New Orleans. He also had a combined 65 yards receiving on six catches.

Injured in their game against Chicago on November 20, Falcons tight end Kyle Pitts will miss the rest of the season after MCL surgery on his right knee. Pitts had 28 catches for 356 yards with two touchdowns in 10 games in 2022.

The fourth overall draft pick last year, Pitts was a Pro Bowler as a rookie catching 110 passes for 1,026 yards, averaging 15.1 yards a reception.

“There is nothing that can ever replicate the live reps of a NFL game, especially playing in the pocket at the speed this game is at and the rushers you face,” Smith said. “It was a guy that’s improved, week after week. They did a nice job Monday night, they were really balanced. You could see a young player getting into a rhythm. He is a talented football player.”