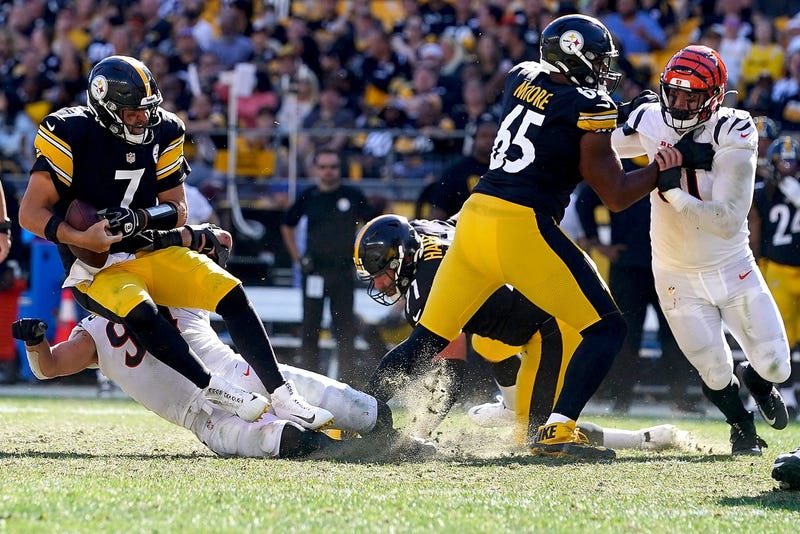 PITTSBURGH (93.7 The Fan) - What I’ve always loved about watching sports, covering sports, is that there is always something different, something new. Week-to-week, game-to-game, we don’t know what’s going to happen. We may have an idea but we never know for sure until the games are played.

But, even though it is only three games into the Steelers season, we do know what’s going to happen each week. The offensive line is going to be terrible and the really bad news is that there is nothing they can do about it until 2022.

The line (mostly) escaped criticism after the Buffalo game because, well, they won. But that was because of a relentless defense and the special teams who scored on a blocked punt.

That group was not good in the Vegas loss (when Ben Roethlisberger was hit ten times) and then actually worse against Cincinnati. Since the defense was operating with a skeleton crew against the Raiders and missing their two OLBs against the Bengals that unit was substandard at best and was unable to help.

Substandard would have actually been a step up for O-line this most recent Sunday. Roethlisberger may not have been hit 10 times, but close enough, and he was sacked four more times.

Although at least a couple of the sacks were on Ben for holding the ball too long that was due to the Bengals getting home with only 4 or even 3 pass-rushers. No wonder he couldn’t find an open receiver with the defense dropping 7 or 8.

Still, the thing that hurt the Steelers most against Cincy – penalties. Say this for the offensive linemen; they are equally opportunity penalty-committers. Each was the five lineman was penalized at least once – Green and Dotson for holding (Dotson twice but one was declined) and Turner, Moore and Okorafor for false starts.

“We didn’t play smart enough,” Mike Tomlin declared. “That was reflected in the penalty game.”

“Penalties kill ya,” Roethlisberger agreed. “There were some drive-killers in there so, yeah, it’s huge. We can’t have ‘em.”

To add injury to insult, Chuks also left the field with an injury after his penalty. It was later announced as a concussion (somehow) and he is now in the protocol. Green suffered a knee injury late in the game. So perhaps Joe Haig and J.C. Hassenauer will have to start next week but I wouldn’t expect them to turn things around.

Tomlin didn’t waver when I asked him if he is still optimistic that his line has shown that it will improve which he has said each week. “Certainly,” he answered. “Not reflected in today’s performance but if you’re asking me my level of optimism, sure, I believe in these guys.”

The QB was also forgiving. “We you drop back 50-some times, don’t know how many times we threw it today, those are going to happen,” Roethlisberger reasoned. “I thought the guys put forth a good effort today. It’s not easy when you’re blocking the group that put a lot of money into their D-line. We knew coming in they were are a good group. It’s not on the guys up front by any means.”

The quarterback and the coach are saying what they’re supposed to say. They’ve been around long enough to know that ripping teammates in public isn’t going to accomplish anything, certainly when it comes to developing confidence.