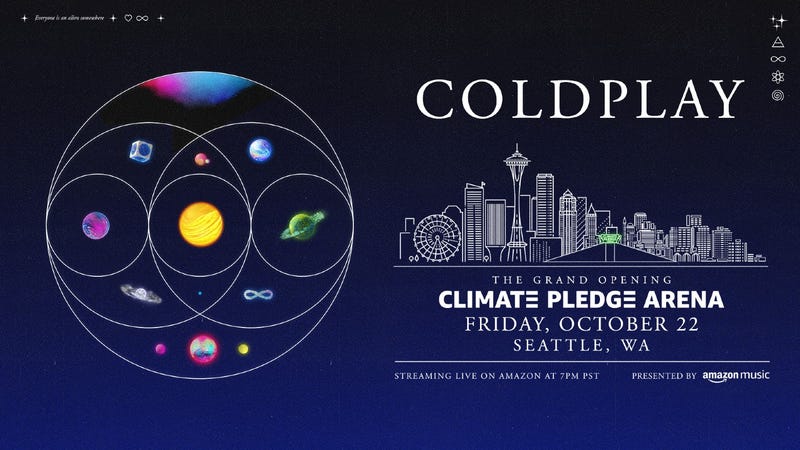 The new home of the Kraken, Seattle's new NHL hockey team, is also designed to be a world-class concert venue. We'll find out how Climate Pledge Arena works for live music in October when Coldplay does the first live concert in the new arena.

The show is scheduled for Friday, October 22, the night before the Kraken play their first game as Seattle's brand-new NHL hockey team.

Tickets for the Coldplay concert go on sale Wednesday, September 15 at 10AM at Ticketmaster. (Here's the link.)

If you can't make it to the concert, Amazon will livestream the show on Prime Video.

The concert will be Coldplay's first live arena show in nearly five years, and it coincides with the release on October 15 of Music of the Spheres, the band's ninth album.

This inaugural live concert at Climate Pledge is the first of many shows planned for the new venue, which was designed to be a state-of-the-art space for music as well as hockey.

Other shows on the Climate Pledge schedule include country star Eric Church ion October 30, then comes opera legend Andrea Bocelli on November 3, two nights with the Eagles on november 5 and 6, and a rockin’ double bill on November 7 with with Evanescence and Halestorm.

As the arena announced the other day, everybody age 12 and up will need to show proof of vaccination or a recent negative COVID test to attend any event at Climate Pledge.

Here's all the information from the venue about the Coldplay show and the festivities around the grand opening in October.