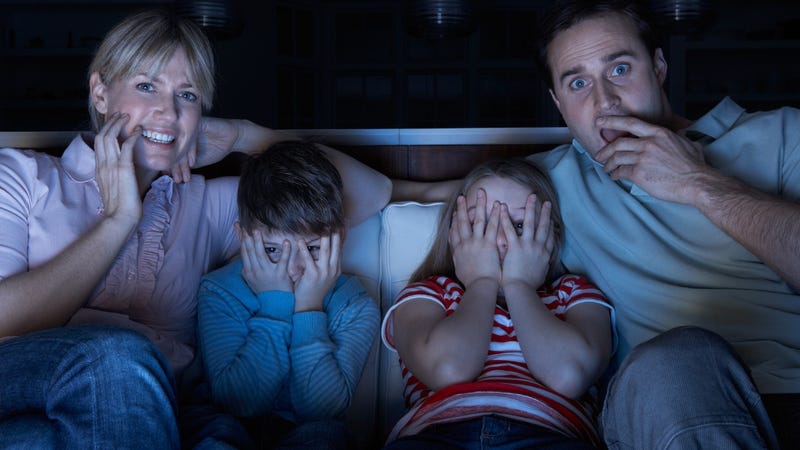 Picking the right movie during October can be hard, depending on who's watching with you.

Is it just you and your sweetie doing a Netflix-and-chill night, and you're up for something truly disturbing so you're both inspired to cuddle closer together? Or are there kids around, or even sensitive adults who can't handle blood, guts, suspense, and horror?

You should be able to set the exact Halloween mood you're looking for with this great list: The 49 Best Halloween Movies to Watch This October.

The list is courtesy of The Cut from New York Magazine. It pretty much runs the gamut from mild and family-friendly to knvies and gore to strange, scary, and surreal.

If you're parked on the couch with young kids and a big bowl of popcorn, you might keep things pretty tame with classics like It's The Great Pumpkin, Charlie Brown, or maybe E.T., or how about Scooby-Doo and its sequel, Scooby-Doo 2: Monsters Unleashed?

Older kids, and people who are a little more adventurous, might go for Beetlejuice, Edward Scissorhands, or Ghostbusters.

If you're looking for old-school suspense -- I mean, like really old -- there's Alfred Hitchcock's classic Psycho.

On the more scary, gross and gory end of the scale, there's Silence of the Lambs, American Psycho, the original Halloween (and all its sequels,) A Nightmare on Elm Street, Carrie (above,) or The Exorcist. About that one, The Cut says, "Don’t worry, it’s as scary as you remember." I'll take your word for it.

Oh, and there's another category of surreal and surprising films -- these may start out one way and take a sharp turn in a horrifying direction. I have to say these are my kind of scary movies. There's some gore, but they really take you down a long path where you start to say to yourself, "WTF is happening here, anyway?"

There have been some pretty strong films in the past couple of years that fall in this category:

Midsommar, a Swedish film about a summer celebration that turns deadly. One of the cool things about this one is that unlike most scary movies, it's filmed almost entirely in bright sunshine. Still scary!

Jordan Peele's Get Out is a thriller about racism that seems innocent at the start and then the next thing you know, you're saying, "WHAT THE #@$& IS HAPPENING HERE???"

I raved about Parasite when it came out in 2019 and I never stopped raving about it. Last year it did wind up winning all kinds of accolades, including Best Picture at the Academy Awards. It, too, starts with an engaging story and shows you a couple of different takes on life in a place you probably don't know that much about (unless you've spent time in South Korea,) but then things take a turn. Don't let the subtitles scare you -- Parasite deserved all the kudos.

I'm going to also recommend a creeper from this past summer by the director M. Night Shyamalan -- a film called Old. It's another one that's not set in the normal horror film environment -- the action happens at a posh tropical resort -- but it's another film that'll make you say, "WHAT THE #@$& IS HAPPENING HERE???" (Check out the trailer below.)

This list is a good start if you're ready to be freaked out in your own home. So make some popcorn, dim the lights, wrap yourself in a cozy blanket and go for the gore.

Don't forget to lock the doors!